Ikarus 120e – the (electric) rebirth of a well-known brand 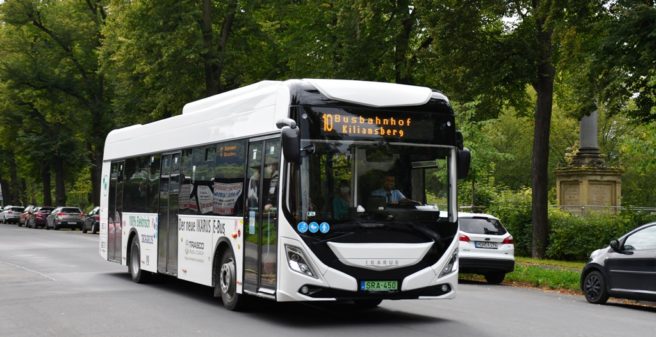 In 1895, a company was founded in Hungary that was to become one of the largest bus manufacturers in the world. “Ikarus”.

Ikarus became really well-known outside Hungary after the Second World War. The company had its heyday in those years when the world was divided into East and West and the “Council for Mutual Economic Assistance (COMECON)” was responsible for the economic relations among the countries of the so-called Eastern Bloc. One of the ideas behind was the concept of concentration of the production of certain investment goods in one of the countries in order to raise synergies

When the individual products were allocated to the individual CEMECON member states, Hungary – and thus Ikarus – was given responsibility for the construction of buses. The COMECON priciples often were not implemented consistently, so buses of the Jelcz brand (for example the type “PR 100” under licence from Berliet or later from Renault) and Autosan were built in Poland, the Karosa brand in Czechoslovakia (that was the name of the state at that time), and the IDAC and Roman brands in Romania.

Buses that became famous were built in the Ikarus workshops, for example, the two models Ikarus 55 (the touring and intercity coach) and Ikarus 66 (the regular service coach) with their characteristic appearance with the engine compartment protruding far out of the rear of the coach (with an air-cooled motor) nicknamed “cigar”. In the 1960s, Ikarus launched its first articulated bus, the Type 180 – it is said to have been inspired by the Henschel articulated buses of the HS 160 series.

In the mid-1970s, Ikarus launched its most successful models, the 200 series, which was available in different versions, as coaches, (city) buses, and articulated buses, and became one of the most popular bus series in the world. More than 30,000 Ikarus of the 200 series were delivered to the GDR alone.

Ikarus sales of its buses were mainly limited to countries of the the Eastern Bloc, however, with a few exceptions. In the seventies, the Ikarus 190 model was introduced as a “Federal German” standard bus according to the specifications of the then VÖV (Association of Public Transport Companies). A prototype was delivered to the Hamburg Hochbahn, followed by a total of 154 buses to German operator Verkehrsbetriebe Hamburg – Holstein (VHH) between 1973 and 1977, and quite a few of them were sold on to private companies all over Germany after they were taken out of service by VHH. There is a story that 300 of these buses were also delivered to Mexico City, but this could not be confirmed.

There was also a cooperation with Western-German bus manufacturer MAN. MAN wanted to extend its range of buses downwards with a midi coach. They didn’t want to develop it themselves, so they took the bodyshell of the smallest Ikarus, fitted it with MAN technology (engine, axles, electrics etc.), modernised its appearance a little … and launched the final prodcut onto the market as the “MAN CR 160”. The CR 160 was not a success, only approximately 10 coaches of this model were ever built. One of these ten was tested once as a demonstration coach on the Bonn express bus route to the airport (main station – Cologne/Bonn airport).

After the end of the Eastern Bloc Ikarus soon faced a lot of technical and economical problems, launched new models, but struggled to get survive against Western European competitors. The company tried to enter the „Western“ market with modern products. Several low-floor midi buses of the type 405.02 were delivered to the WSW in Wuppertal – who also on loan to EVAG in Essen as a demonstration vehicle. In 1995, 17 low-floor articulated buses of the type 417.04 were sold to Wuppertal‘s WSW, and the WSW also had an Ikarus coach (no. 9500).

In 1999 Iveco took a stake in Ikarus, however, the cooperation was not very successful, and Ikarus eventually closed in 2006.

A few years later, the „hype“ of electric buses began. BYD built fromscratch a completely new factory in Hungary. CRRC (China Railway Rolling stock Company) had a different approach: They bought one of the two former Ikarus plants in Hungary including the brand name. And subsequently production of Ikarus electric buses started. And more than that, by the way: There are also new diesel buses with the name of the traditional brand. The new Ikarus electric bus is called the “Ikarus 120e CityPioneer”. It is powered by an electric motor from CRRC.

CRRC is also a very old company, which was founded at the end of the 19th century and thus long before the communist revolution in China and – hence the name – was initially engaged in building and repairing railway carriages. Today, the company is one of the world’s major players in the field of railway vehicles; its product portfolio includes, for example, an electric express train similar to our German ICE. And CRRC has already bid for DB tenders.

The German partner for sales and maintenance of the buses is the company Trasco in Bremen, which has a demonstration vehicle. Which e.g. has already been with Meininger Bus-Betriebe in Thuringia, Senftenberg, Hoyerswerda and Bad Belzig. Test runs in Hanover and Bremen are already booked. So there is a lot of interest in the electric bus from Hungary. Let’s see what orders result from it.

84 passengers, of which: 28 seated, 56 standing, 2 folding seats on the platform opposite the centre door,here also space for prams and wheelchairs.

around 250 kilometres with heating and air conditioning