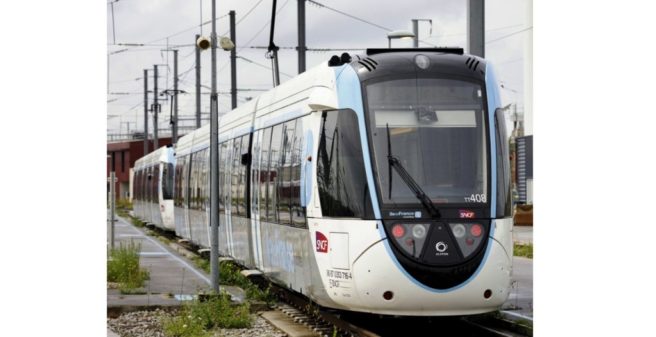 TramTrain trains have been operating in Greater Paris on line T4 line between Aulnay-sur-Boie and Bondy for 16 yaers, but not only there: Since July 2011, service on the approximately 10 km long, electrified branch line of the SNCF from Esbly to Crécy-la-Chapelle has been provided by the same Siemens Avanto trains used until recently on the T4. The route is part of the regional railway network of the operator Transilien SNCF and is a branch line of the regional railway lines P from Gare de l’Est to La Ferté Milon and Chateau Thierry. A network map can be found here:

The current vehicles are gradually being replaced on line T4 by Alstom Citadis Dualis, which have been operating line T11 since 2017 and will on the other TramTrain lines T12 and T13 in the future. The French state railway had concluded a framework agreement with Alstom for up to 200 such vehicles. The Tram-Train Dualis low floor tram trains, whose design is based on a modular structure, are 42 metres long and can accommodate 250 passengers thereof 95 seated. These new trains are part of a comprehensive plan to renew and modernise the rolling stock on all Île-de-France lines, financed by Île-de-France Mobilités, in order to improve the reliability of the service and the comfort for passengers.

After previous test runs since 12 February, Transilien SNCF started using the new Tram-Train Dualis trains on the Esbly – Crécy-la-Chapelle line on 8 March 2022, at the request of Île-de-France Mobilités, replacing the old train sets.

Maintenance of the 11 Dualis trains for the T4 and the 15 trains for the T11 plus the Esbly-Crécy branch is carried out in Tram-Train’s specialised workshop located in Noisy-le-Sec. Its proximity to line P will allow easier maintenance in the long term. The future of the Siemens Avanto tram trains after phasing out in Paris – which also operate on the tram train line in Mulhouse – is not yet known.