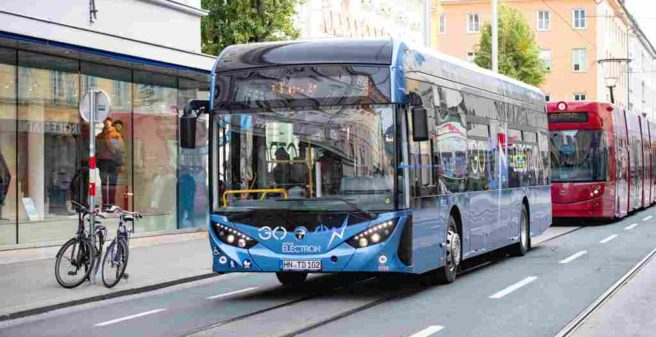 Innsbruck public transport company IVB is examining various options for the gradual introduction of electric buses in city transport and has been testing different models since the summer. Currently, the 12-metre-long e-bus “Avenue Electron” from the Turkish manufacturer Temsa is in operation on lines A and M. “Due to its equipment with mainly seats, this is not a typical city bus. However, we are primarily interested in testing the driving performance and behaviour in daily operation,” informs IVB operations manager Harald Jösslin. It is also planned to tow the bus after the battery has been completely drained. However, this exercise will be carried out outside of passenger service.

The use of the new Mercedes e-CITARO bus was already tested in the summer. “By 2023 at the latest, it should be possible to be on the road with the first IVB e-buses in the city area,” hopes IVB Managing Director Martin Baltes.  Over a period of 14 years, electric buses are expected to be delivered annually in stages to gradually replace diesel buses. For the most heavily used lines, battery trolleybuses modelled on those in Salzburg and Linz are also being considered as a possible option – but a decision on the technology actually used has yet to be made. Trolleybuses have been running in Innsbruck since 1944-1976 and 1988-2007.