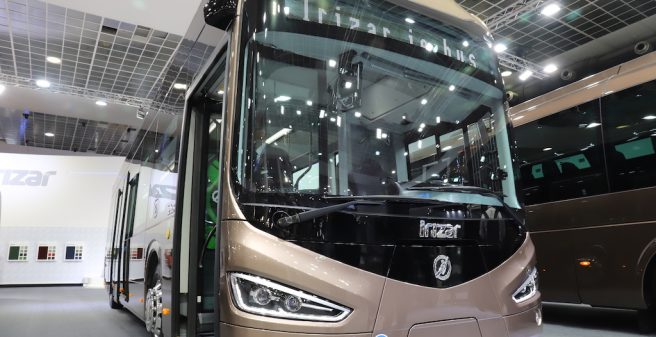 At this year’s Busworld 2019, the Spain-based bus and truck manufacturer Irizar presented the new generation of the Irizar ie bus. It is the second generation of Irizar’s electric bus range, the ie bus, which has been launched in July 2014. So far, around 100 ie buses have been sold to several cities in Spain, France, Portugal and the UK. The new generation of the ie bus has not only been updated from an aesthetics point of view, but also in terms of technology. It has an improved battery range and several new design features such as weight reduction and improved passenger capacity. The first reference of the new generation ie buses will be delivered in mdid-2020 to the German city of Düsseldorf. Rheinbahn Düsseldorf will receive a total of 10 ie buses with a length of 12 meters each.

The new ie bus generation is available in 10, 12, 15 and 18 metre variants and incorporates several innovations as well as new batteries. The interior space has been optimised, achieving higher passenger capacity and improved modularity. In the 12 meter version, there is space for 33 seats and two spaces for persons with reduced mobility (PRM). A new generation of more efficient batteries has been combined with a regenerative braking system in order to further reduce energy consumption and offer longer battery range. In urban environments, with a charge of 350 kWh and in standard weather conditions, the ie bus has now an approximate range of 250 km, which is equivalent to around 17 hours of operation. The ie bus is fitted with 180 kW Siemens motors which drive the two front axles.

The Irizar ie bus offers up to 5 interoperable slow charging point positions using a combo 2 connector. Charging time has decreased and the vehicle can be charged in 3 hours. There is also the option of fast charging via pantograph. The charging power can be configured between 50 kW and 600 kW. The entire traction chain including the batteries have been developed by Irizar it self.

The second generation of the ie bus also features a new exterior and interior design. The front design has a rather elegant touch and fully in line to the aesthetic features of Irizar’s products. The interior design has also been modified so that some of the Irizar ie tram’s features may be incorporated, including large windows, side lighting or screens above the windows, among others. The interior is layout is modular and can be configured flexibly by the customer.

In addition to complying with the latest rollover safety regulations, ECE-R66/02, the European regulation that measures the structural strength of large passenger transport vehicles, the AVAS (Acoustic Vehicle Alerting System), an acoustic warning system that complies with R138, has now been incorporated. A new dashboard which complies with fire regulations 118R annex 6, 7, and 8 has also been included.

The new generation of the Irizar ie bus enables easier and more ergonomic vehicle maintenance based on optimised and improved accesses at different points in order to reduce the operating and life cycle costs of the fully electric bus.