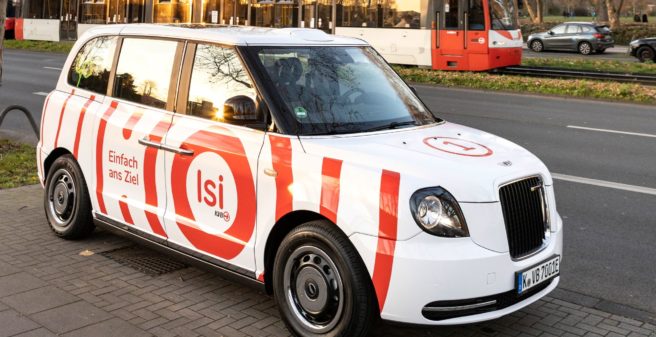 “Isi” is an on-demand service – it does not run according to a fixed timetable on fixed lines, but upon request by telephone or by App on individual routes. However, there is no door-to-door service – the new service is not intended as competition to the taxi business, and so “Isi” has defined stops. These should be no more than 100 metres away from the passenger’s starting point or destination.

Unlike a taxi, “Isi” does not stop everywhere. “Isi” serves defined stops – even if there is a dense network of them.

If a passenger wants to travel with “Isi”, he/she orders the car by phone or via app. The system determines which car is nearby and when it can pick up the passenger. It also tells the passenger when he/she is likely to reach his/her destination. This, however, is somewhat dependent on the demand for “Isi”, because the system is programmed to combine trips with very similar routes into one trip. Let’s take an example:

The system recognises that these two travel orders can be perfectly combined to a single trip, and proceeds accordingly. So now “Isi” travels from Z-Straße 33 via Z-Straße 47 and X-Straße to Y-Straße. This means, however, that passenger A is now travelling a little longer than he/she was originally told. But he/she will of course be informed about the new arrival time by message on his/her smartphone …

“Isi” is not intended as a service all over the city. Rather, it is intended to provide an additional service in certain districts of the city that are relatively sparsely populated, where the stops of the “conventional” lines are therefore relatively far apart and where the share of private transport in the total traffic volume is therefore particularly high.

“Isi” charges the normal tariffs of the Verkehrsverbund Rhein – Sieg (VRS). The tickets of regular customers such as VRS chip cards, JobTickets or season tickets are recognised. Occasional customers can also travel with a single ticket, although only those in price categories 1b or higher are valid – single tickets of the short-distance tariff are not valid on “Isi”. If you book the ticket via App, you pay 10% less, you can pay via Paypal or credit card. It is possible to buy tickets in the vehicle, where you can pay by credit card, EC card or Paypal. Cash payments are not possible.

For the time being, three service areas have been defined. These are the districts of Elsdorf, Ensen, Finkenberg, Grengel, Gremberghoven, Poll, Porz, Urbach and Westhoven in the south-east of the city on the right bank of the Rhine with some 1,500 stops. Six to seven Isi cars are planned to be operating at one time. In the north-western part of the left bank of the Rhine, the districts of Bilderstöckchen, Mauenheim, Neuehrenfeld, Nippes and Weidenpesch have more than 700 stops. The KVB plan to use the remaining three to four coaches here.

Five of the six districts of the city of Cologne are located in these areas, which are home to a particularly large number of senior citizens who have to deal with a distance of more than 300 meters to their respective next stop in the existing network. For them, journeys by public transport to go shopping, to get supplies and, for example, to be on time for doctor appointments will become much easier.

“Isi” will be offered in these two areas from 8 a.m. to 3 p.m. Monday to Friday. KVB’s explanation for this time restriction is relatively simple: “We don’t want the “Isi” to be stuck in traffic jams at rush hour which would ultimately provide no additional benefits to our passengers”.

The third service area is Cologne city centre and adjacent areas in the evening and night hours from 8 pm to 3 am. Here “Isi” is constantly on the road at these times, because there is a lot “going on” here. There are around 1,400 stops in this area. The offer is regularly available during the nights from Friday to Sunday and during the nights before public holidays. Depending on demand, all 10 “Isi” can be used here. KVB charges a surcharge for the “night shuttle” in the area of the city centre and the surrounding neighbourhoods. It amounts to 3.10 Euro for regular customers and children (until 31.12. still 3.00 €) and 4.10 € for occasional customers (until 31.12. still 4.00 €).

A trip with “Isi” booked via App can be cancelled free of charge within 60 seconds, later cancellations or those made by telephone are not possible. And if you “move” the shuttle bus, there is a fee of 3 euros.

For their new service offer, the KVB have chosen a vehicle that at first glance seems quite exotic, the legendary London Taxi. But in a much more modern form, and of course in a version for right-hand traffic. Above all, however, not with a diesel engine, but with an electric motor from Siemens and with lithium-ion batteries provided by LG Chem from South Korea.

The ten cars (KVB 7001 to 7010) of type “LECV TX eCity B” were built by LECV (London Electric Vehicles Company). This company has its headquarters in Coventry, so to speak, and is therefore “lying” about its company name. LECV is a subsidiary of the Chinese Geely group, better known in Germany as the mother company of the car manufacturer Volvo and as one of the biggest single shareholders of Daimler AG. But the Chinese have given their taxi child the perfect outfit of a typical London taxi.

The cars are based on an aluminium floor assembly, the body is made of plastic. The car is therefore deliberately kept light. This is also logical, because the less weight the car is carrying, the less energy it uses for propulsion and the less electricity it has to draw from its battery.

The cars can carry up to six passengers. Three seats backwards in the second row are opposite three seats forwards in the third. Since the seats in the second row are all installed in a different position, the “foot space” between two opposing seats is different in each case. (Note: at Corona times, however, only a maximum of three passengers may be carried). And one very typical detail of London taxis is not missing either: the separate luggage compartment next to the driver’s seat. The KVB recommend to stow luggage and full shopping bags there.

And why did the KVB chose the London taxi? The explanation is plain and simple: according to the KVB, this vehicle is the easiest to access for people with disabilities because of its completely flat floor. There is also a ramp so that wheelchairs can enter the bus.

A special group of drivers has been formed to travel with the “Isi”. They have of course also been specially trained. They are supposed to drive “Isi” for one week and then the next week on a normal bus.

It was mentioned above that the LECV TX eCity is no longer such an “exotic” vehicle in Germany anymore. Actually they are also in service in the following German cities:

6 seats (three backwards in the second row, three forwards in the third row), average distance of the opposite seats 564 mm

Luggage compartment next to the driver’s seat

Drive on the rear wheels