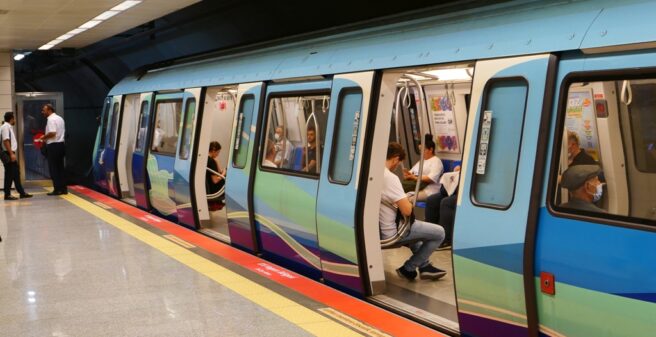 The major airport Sabiha Gökçen in the Asian part of Istanbul is now also accessible by rail: On 2 October 2022, head of state Erdogan officially opened the 7.4 km extension of the M4 metro line from the previous terminus at Tavsantepe to Sabiha Gökçen Havalimani. The line is now 33.9 km long and runs completely underground. It is operated by four-car trainsets built by Spanish manufacturer CAF. Every second train runs in double traction – special stop markings have been placed on the platforms to help passengers find their way.

The M4 was opened as the first metro line in the Asian part of Istanbul in 2012, initially covering 22 km with 16 stations between the ferry terminal in Kadiköy and Kartal. In 2016, an extension of 3.5 km and 3 stations to Tavşantepe was added and now another 4 stations to the airport. A branch line from Tavşantepe to Içmeler is under construction, and in the future a branch line M10 from Sabiha Gökçen to Fevzi Çakmak will share the M4 route, it will branch off from there to Pendik. In Pendik, there is a connection to the Maramaray express suburban railway to the centre of Istanbul which allows for additional, fast connections in the future.