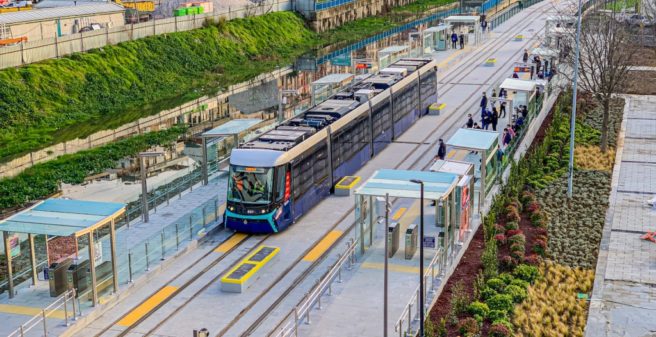 On 1 January 2021, the new tram line T5, which runs completely without overhead lines, was put into operation in Istanbul with Durmazlar vehicles.

The Golden Horn has been one of the most important ports and historical sites on the Bosphorus since ancient times. The name derives from its shape curved like a horn and from the splendour and wealth of the Byzantine and Ottoman metropolis, but also from its golden glow in the evening sun. The Turkish name of the approx. 7 km long estuary Haliç simply means “mouth”.

Not far from the Golden Horn, Greek colonists founded the settlement of Byzantion around 660 BC. Today, the estuary lies in the middle of the built-up area of the centre of the metropolis Istanbul with its approximately 15 million inhabitants.

The shores of the Golden Horn are lined with numerous green spaces and parks. The estuary is crossed by four bridges. From the Bosphorus upwards, these are the Galata Bridge, the Metro Bridge of the M2 line over the Golden Horn, the Atatürk Bridge and the Haliç Bridge.

For a long period in Istanbul’s history, the Golden Horn was the city’s most important port. This centuries-old function was lost with the increasing size of ships. At the latest since the construction of the Galata Bridge, only minor port activities took place in the Golden Horn within the bridge.

Until now, the Golden Horn was mainly connected by bus and ferry services and a metro station on the M2 line called Haliç.

Since 1 January 2021, a new tramway connects the Cibali bus station and Alibeyköy Cep. With the Küçükpazar and Eminönü stations, which will be built in the second phase of the line, the line will be connected to the terminus of the historic peninsula and thus also provide an interchange to the T1 tram line and numerous bus lines. For the first time, power will be supplied without overhead lines via third rail. The new tram line T5 connects the Eyüpsultan and Fatih districts, where about 1 million people live. Despite its name, the T5 line is only the fourth real tram line in Istanbul. In addition to the modern low-floor T1 line, there are the T2 and T3 lines, which are historical tram lines. Line T4 is a light-rail line, operated with high-floor rolling stock.

A video of the new tram line T5 is available here:

The tramway line was built entirely without overhead contact lines and uses Alstom’s APS (Alimentation par le sol) conductor rail system, which has been in use in Bordeaux since 2003 and is now in use in several cities around the world. The conductor rails each have a length of 11 metres, which are controlled via the vehicles and are energised when the vehicle is on the segment. When no vehicle is present, the tracks remain without power. This is the first time that the system has been used in combination with vehicles from another manufacturer. The reason for using the “third rail” is the historical structure on the peninsula.

Construction work on the line began in 2016 and was carried out by the Turkish construction company DOǦUŞ. The 8.8 km long line has 12 stops and runs parallel to the western shore of the Golden Horn. It is running entirely right-of-way. The final stop Alibeyköy Cep is located inland northwest of the estuary. When fully completed, the line will have a length of 10.1 km.

The Bursa-based manufacturer Durmazlar was awarded a contract to supply 30 trams in January 2018. Durmazlar uses components from European manufacturers, including Knorr/Selectron control technology and vehicle software.

The journey time is about 30 minutes. Approximately 51,300 passengers per day are expected. A 6-minute interval is offered. The operator is the Istanbul Metropolitan Municipality (IMM) and Metro Istanbul.

The public transport construction boom will continue in the coming years. The website Rayhaber gives an overview of the lines currently under construction.

More information, pictures and maps of the Istanbul public transport network can be found here: http://www.urbanrail.net/as/tr/istanbul/istanbul.htm

Hi, what was the cost of the line (without trams) ?