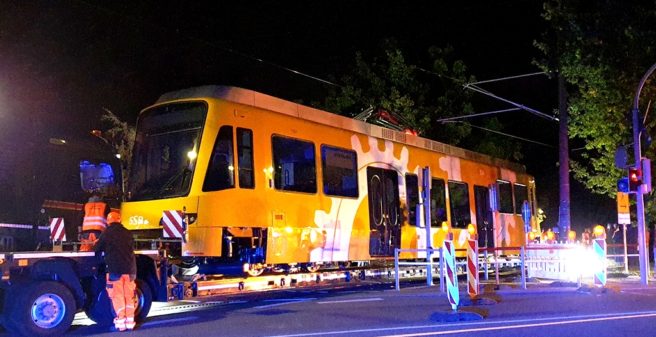 Stuttgart is one of the very few places in the world where a rack railway is still part of the city’s public transport network – the most common use for this mode of transport is still in tourist-oriented excursion traffic.

Stuttgarter Strassenbahnen AG (SSB) operates the meter-gauge rack railway between Marienplatz and Degerloch over a length of 2.2 km and with a maximum gradient of 17.8 percent on the line (even 20 percent on the depot approach). For the locals in Stuttgart, it has been part of the transport service since 1884 and is well-known under its nickname “Zacke”.

Over the years, the SSB has repeatedly modernized the line and adapted it to new requirements. And teh next round of modernisation has already started: On the evening of 30 September 2021, the first of three brand new rack railcars on order arrived in Stuttgart on a low-loader from the Swiss manufacturer Stadler Rail, together with one of the new trailers for bicycle transport.

After around 40 years in service, these vehicles have reached the end of their technical and economic service life despite a basic refurbishment in 1999/2001: They are in need of renewal, the procurement of spare parts has been very difficult for a long time, and the vehicles, with their three entrance steps, also no longer meet the requirements for contemporary, barrier-free access. The new 20 metres long units have a low-floor design between the two entrance doors and offer modern passenger comfort. Improvements include the new trailers – they offer twice as much space for bicycles as before, now 20 can be transported. In terms of design, the railcars are based on the proven S-DT 8.12 series built by Stadler Rail for the SSB’s light rail lines since 2013 – some observers said that appear like a “shortened light rail”.

The total value of the order for the three railcars and three bike trailers, including a spare parts package, amounts to a total of 19.3 million euros. The Stuttgart City Council had already approved an investment grant for the procurement in July 2017: It will amount to €2.5 million per unit. In addition, the state of Baden-Württemberg will provide a subsidy of one million euros per railcar. The changeover to the new rack rail fleet is to be completed next year. They are the fourth generation of vehicles since the electrification of the railroad in 1902.

Also from Stadler Rail, the first new light rail car of the third series of car type S-DT 8.x arrived in Stuttgart on 3 September 2021 numbered 3581 by SSB. Vehicles of this type have been in service on Stuttgart’s light rail network since 2013. No. 3581 is the first of this new series, called S-DT 8.15 comprises 20 units, like the previous two series 8.12 and 8.14. All 20 vehicles are scheduled to arrive in Stuttgart by spring 2023. One vehicle costs around four million euros.

After formal commissioning at the SSB with adjustment, trial and brake test runs and approval by the Stuttgart Regional Council as the supervisory authority, the new train sets are expected to start passenger service in the upcoming weeks.