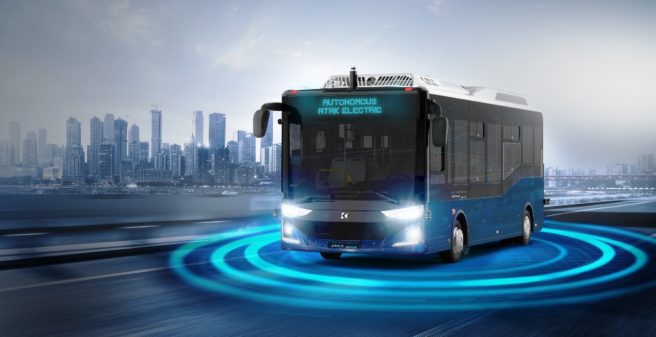 In 1966, the bus manufacturer Karsan was founded in the Turkish city of Bursa. Until not too long ago, Karsan specialised in minibuses and midibuses, and it continues to be quite successful with them, especially in its home market, where minibuses and midibuses play a much bigger role than in Central Europe. But Karsan is expanding its product range, also in the direction of large buses. At the beginning of the last decade, for example, the company acquired the licence rights to produce the “Citymood” series of city buses from the Italian company “(Breda-)Menarinibus”. And when Menarinibus ran into financial difficulties, Karsan helped it to get back on its feet by taking over 70 % of the company‘s shares. Since then, the business has been “up and running again”, now under the name “Industria Italiana Autobus (IIA)”. Since this transaction, Karsan’s product range officially includes Citymood city buses as well.

Karsan builds its buses in the city of Bursa, located in the Asian part of the country not far from Istanbul. It owns a 200,000 sqm factory, where up tp 180 complete buses can be built every day. The CEO of Karsan is Mr. Okan Bas. The development and programming of the autonomous bus is carried out in close cooperation with the Californian company Adastec, headed by Dr. Ali Ufuk Peker.

Accordingly, the company presented its latest model, the „Atak Electric“ midibus. It is a world premiere for an autonomous bus, which is also powered by renewable energy The vehicle is 8,320 mm long – and thus the first autonomously driving bus of this size in the European markets. It can carry 52 passengers and its batteries provide a range of up to 300 kilometres.

Mr. Okan Bas pointed out that the length of autonomous buses in the past was significantly shorter in comparison to Atak‘s new model. Because of its passenger capacity alone, the autonomous Atak is therefore a clear step forward. The importance of public transport is increasing worldwide. Not only in the current times of the Corona pandemic, but also, for example, as a countermeasure to climate change. And Atak Electric makes it possible to save natural energy resources. The urbanisation of the world is increasing: 50% of the world’s population already lives in cities, and this percentage will increase to 70% in the foreseeable future.

Today, China is the global market leader in the field of alternative drives, followed by Europe, the USA and other countries in Asia such as Japan, India and South Korea.

According to Bas, Karsan “first started developping the new technology of electric drives in 2018”. A first „Jest“ bus was completed, which was (and is) equipped with an electric motor and battery from the BMW i3. The battery has a capacity of 220 kWh. This „Jest Electric“ had some immediate success in the market, which convinced Karsan to offer the bigger brother Atak, also as an electric bus and also with BMW technology inside.

According to Mr. Bas, local public transport is becoming noticeably more popular. After all, it does not only take a lot of time to get from A to B with your own car, but it also takes more and more time to find a parking space. If public bus transport, like the new autonomous Atak, is electric, it also makes a significant contribution to cleaner air in our cities by reducing the consumption of fossil fuels.

Bas: “It is obvious that electric and autonomous vehicles will play an increasingly important role in public transportation.”

Autonomous bus ideal for the line

“Scheduled buses,” says Okan Bas, “rarely leave their scheduled routes. That’s why they are just ideal for autonomous driving, because it makes it relatively easy to program them specifically for their respective routes.” For example, their programming can be adjusted to the individual routes so that the “driving style” of the car is aligned with the topography of the route, thus significantly saving energy.

In order to be able to drive autonomously, the bus is equipped with sensors all around. The software is called “flowride.ai” and was contributed by the Californian company Adastec. It ensures that the bus not only recognises the course of the road, but also other road users. This includes, for example, cyclists and motorcyclists. In general, it has to react to every moving or non-moving object on the road and its surroundings. Or, of course, to traffic lights – and to whether they are currently showing red, yellow or green. Pedestrian crosswalks were a special programming challenge, because here the bus not only has to recognise whether there are pedestrians on the road, but it may also have to react very quickly if a pedestrian – trusting in his or her right of way – steps very briefly in front of the bus. Dr. Peker: “The bus must constantly locate where it is. And it must constantly check all the objects around it: are they moving, and if so, where? To do this, the autonomous Atak Electric scans its surroundings 20 times every second (!).

About the autonomous Karsan Atak Electric

In general, Karsan is working on converting its entire product portfolio to electric drive. And this should soon include “full-grown” electric buses with lengths of 12 and 18 metres.