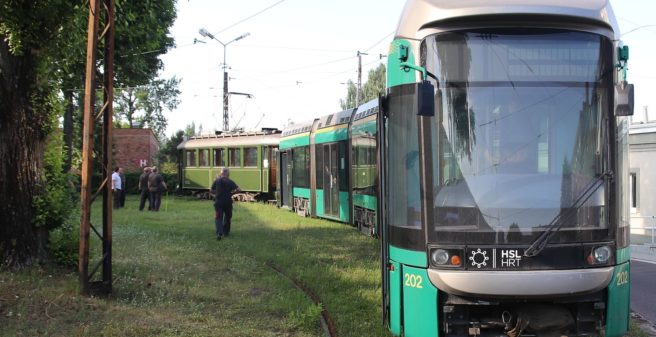 On 7 July, the two Variotrams from Helsinki were unloaded at the main workshop of MPK Łódź's in Ul. Tramwajowa I © MPK Łódź

On Wednesday, 7 July, in the early hours of the morning, two Variotrams arrived from the Finnish capital at MPK Łódź’s main workshop in Ulica Tramwajowa. In the coming weeks and months, the Łódź transport operator will test the two vehicles in order to decide whether it will buy the 1998-2004 built fleet which consists in a total of 40 vehicles. The two vehicles in question are numbered 202 and 205.

The HKL Helsinki transport company has been planning to sell the 40 vehicles that have been in storage since 2017/18. The first 20 vehicles were delivered by Adtranz and another 20 by Bombardier Transportation in 1998-2003. However, there were technical and operational issues with the rail profiles as well as the operating conditions on Helsinki’s metre-gauge network.

The technical data of the vehicles are as follows:

Although Bombardier took over maintenance for the vehicles from 2006 – 2007, the situation did not improve noticeably. In 2017, it was planned that the vehicles would be taken over by the RNV in Mannheim, Ludwigshafen and Heidelberg. In the end, the vehicles were not taken over.

In the meantime, HKL Helsinki completely replaced the fleet with new ForCity Smart Artic trams from Škoda Transtech, which were developed and produced in Finland.

This summer, the two Variotram trams will be tested on the Łódź tram network. The trial operation is intended to provide an answer to the question of whether the vehicles, which are about twenty years old, can be operated reliably on Łódź’s partly demanding route network.

Only last year (2020), the procurement of the used NF6D tram cars of the years of construction 1992 – 1994 of BoGeStra in Bochum. The 35 low-floor trams have proven themselves in Łódź and are gradually being painted in the red and yellow colour scheme of the transport authority and partially modernised with new headlights, among other things.

In addition to the low-floor trams from Bombardier (15) and Pesa (34), 14 refurbished M8CN trams with low-floor centre section (ex Bielefeld), 9 Düwag GT8N (ex Mannheim/ ex Helsinki) and a good 350 four-axle Konstal 805Na cars in various modernisation variants are still in operation. MPK Łódź is planning to replace the high-floor vehicles in the medium term. At the beginning of 2020, the transport company ordered a total of 30 new Moderus Gamma LF 01 AC low-floor vehicles from Modertrans.