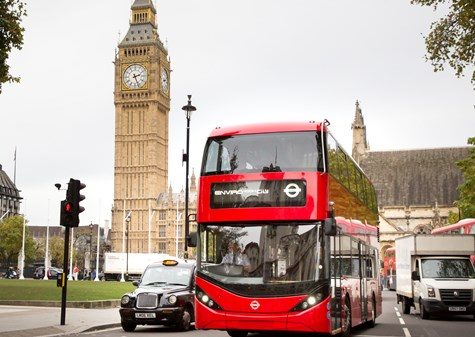 Enviro400EV in London - the Alexander Dennis double decker bus has been fitted with a BYD propulsion and battery system I Photo: ADL

London is not only know for its’ famous double decker buses, but will also be soon known for its electric bus fleet. Already today, there are almost 100 electric buses in operation in London with further vehicles being delivered.

In 2020 the whole double decker London fleet is expected be fully electrical- By 2037 all buses in London (about 8,000) will be zero-emission, London’s City Hall and Transport for London have communicated. Electric bus operation in London started in the year 2015. Since then, a total of 3,240 hybrid buses, 96 electric buses and ten hydrogen buses out of a fleet of ca. 10,000 buses have been put into operation.

The new Enviro400 EV for London

The new Enviro400EV is built in Britain at ADL’s facility in Scarborough, Yorkshire, using BYD components assembled into a powered chassis built in Europe at BYD’s plant in Komarom, Hungary.