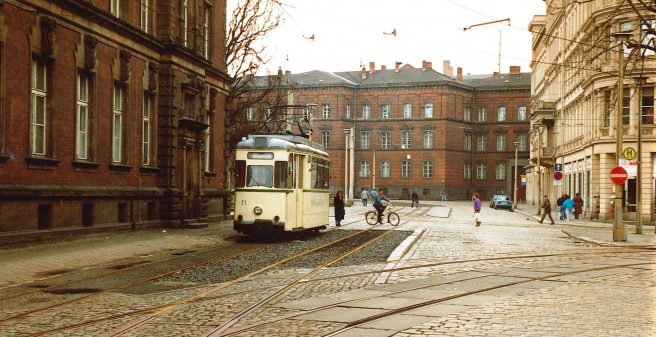 Tramway operations in Görlitz started in 1882 and all its trams ran electric already since 1897. The small system saw several years of decline, with a bus replacement being seriously considered, but since the 1980s some new extensions were added to the network. In the years after the end of the Iron Curtain in November 1989, Görlitz‘ tramway enjoyed the visits of numerous enthusiasts from Western European countries including Western Germany. Most of them experienced the city and its trams for the first time, as travel restrictions made travel planning before not just time-consuming but also highly uncomfortable.

Our photos show the system as of 28 March 1992 – clearly in a period of transition.

With the opening of the new track to Weinhübel on 7 December 1991, nine years after the closure of the original route, the network was simplified. Ticket prices trippled (!) on 1 March 1992, at the same time when the regular 4-wheel tramcar operations were discontinued. The Tatra model KT4 replaced the Gotha and REKO fleet, which were stored and most of them sold or scrapped during the next few months. Five KT4 were purchased from Erfurt, bringing the fleet to a total of 16 vehicles of that type.

Three routes were operated at a 20-minutes headway all days:

Today Görlitz still operates the network with Tatra KT4 although modernized and repainted several times. They will continue to dominate here until the first new low-floor tramways may arrive in a few years time.

All photos by: © Dirk Budach