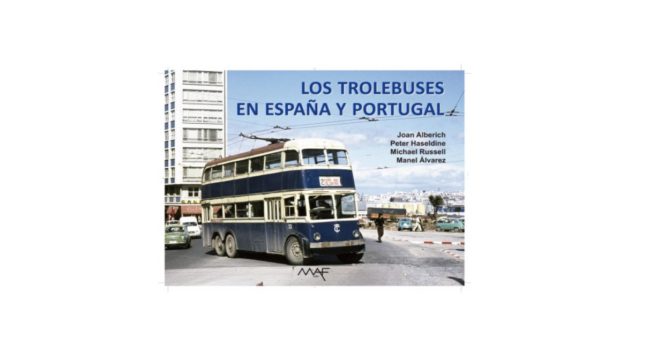 The Spanish publisher MAF Editor presents a colour book with pictures of the different trolleybus systems in Spain and Portugal. Trolleybus operation in and around 17 cities are represented in the order of the opening dates of each system (and thus not separated by the two countries!). For each of the systems a short text part (in Spanish) is followed by several full-page colour photos, only photos from the systems Bilbao-Algorta and Mieres are not included. Several interurban systems that were once operated by separate companies in Spain are also dealt with in the respective city chapter, e.g. in Santander, San Sebastián and La Coruña. The information in the short introduction chapters for each system is quite concise – it’s a colour book – however, some inconsistencies and errors in the text parts could have been avoided, namely in the chapters Pontevedra, Porto, Coimbvra and Braga, among others. Fleet lists and route maps are not included. The quality of the reproduction of quite a number of the photos is not very convincing and not in line with modern standards using state-of-the-art technologies. Unfortunately, something similar applies to the overall print quality. Moreover, various images have already been seen in other media, and some of them even in better quality. One picture has even been on the cover of an English book about double-deck trolleybuses a few years ago.

The book undoubtedly deals with an interesting subject, however, the result is somehow disappointing: This is essentially an illustrated image book, of which one can certainly expect a little bit more for a price of EUR 50.-. In the near future, a more detailed book (in English language) on the subject is expected from a British publisher well-known for its high standard of overall production quality.