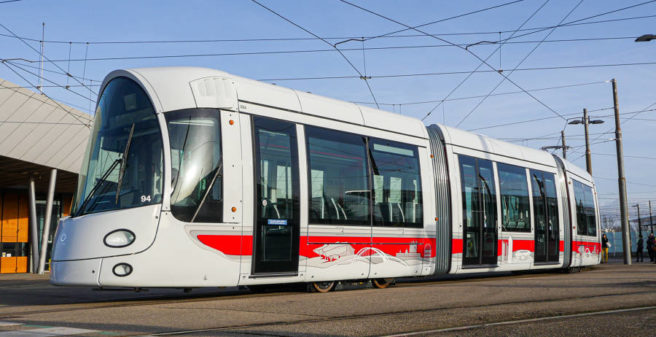 Lyon's new tram design consists in a new cab shape and a new exterior livery, representing the most important landmarks of Lyon I © SYTRAL

The first of 11 new trams in an updated “silkworm design” has been presented in Lyon. The Citadis are characterized by a modified cab shape, which is based on the design already used since 2001. The cab design is representing a silkworm, since Lyon is traditionally a silk weaver city and the tram is a symbol for this history. The so-called “silkworm design” in white was introduced when Lyon’s first tram lines T1 and T2 opened in 2001.

The front of the vehicles was reworked in order to meet the requirements of the French Technical Supervisory Authority (STRMTG). The new cab is designed to better protect cyclists and pedestrians in the event of a collision. Thanks to an optimized inclination of the windscreen, the driver is offered a better view with a wider field of vision. Overall, the new shape gives the tram a more modern appearance. There are no plans to retrofit the existing vehicles for the time being.

In contrast to the Citadis 302 vehicles used to date, the new Citadis 402 have a length of 43 meters and will be used on the T3 and T4 lines in order to cope with the increased passenger demand. Up to 300 passengers can be transported per vehicle.

In December 2019, delivery of the 11 additional 402 trams with the new design started. They are deployed on line T4 which will be operated with 43-meter trams from June 2020, increasing capacity by 30%. From autumn 2020, four more trains will be used on line T3 and will increase the number of seats by 20 to 25%.

The delivery of the 11 Citadis 402 is part of a framework agreement between Alstom and SYTRAL (Syndicat des Transports de l’Agglomération Lyonnaise). The delivery price of the 11 vehicles is 40 million euros, which corresponds to approximately 3.6 million euros per vehicle.