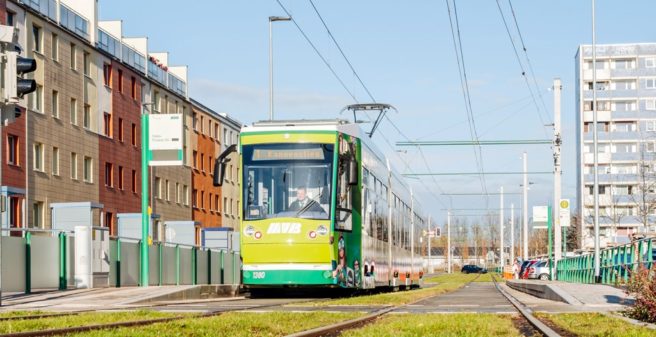 On 28 November 2021, after more than two years of construction, Magdeburg’s municipal public transport operator Magdeburger Verkehrsbetriebe GmbH & Co. KG (MVB) officially inaugurated the new tram service to the residential area of Kannenstieg. The ride was free of charge on this day. On Monday, 29 November 2021, regular passenger service started on line 1 from Kannenstieg to Sudenburg, using the new track starting at Milchweg stop and serving the three new stations Hanns-Eisler-Platz, Pablo-Picasso-Strasse and Kannenstieg (terminal loop) All stops are barrier-free. The Milchweg stop had not been served since 28 June 2021, when track construction work began at the Ebendorfer Chaussee/Johannes R. Becher-Strasse intersection. Since then, the section to the “Ikea” loop and also the intermediate stop Danziger Dorf had not been served, and line 1 was temporarily diverted to Neustädter See (line 9). Since then, bus line 69 has been running to Ikea terminus, and this is expected to remain until 2025, when the southern route connection from the Milchweg stop through Burgstaller Weg via Neustädter Feld to Damaschkeplatz will be opened.

The new tram line into Kannenstieg is part of the construction project “2nd North-South Link for the Tramway”. The new section is one kilometre long. With the exception of the Ebendorfer Chaussee intersection, it is completely separated from car traffic so that the trams can run without interruption. Grass-grown track was laid for most of the route.

The 2nd North-South Link is being funded by the state of Saxony-Anhalt and the federal government. MVB is investing 34.7 million euros in this construction phase, of which 28 million euros are being provided as subsidies.

On the same day, the MVB also reopened 500 metres of completely renewed and rebuilt tram track in the course of Schönebecker Straße, including the renewed stop Budenbergstraße and the cenly created stop Benediktinerstraße / Gesellschaftshaus. Tram lines 2 and 8 now run directly between Westerhüsen, Buckau and Alte Neustadt or Neustädter See, the deviation via Südring is no longer necessary. New tram lines 5 and 13 operate between City Carré and Klinikum Olvenstedt via Warschauer Straße and Wiener Straße (line 5) and between Buckau and Sudenburg via Warschauer Straße and Wiener Straße (line 13), thus providing a direct connection between the two districts.

A route map is available at: http://www.urbanrail.net/eu/de/md/magdeburg.htm .