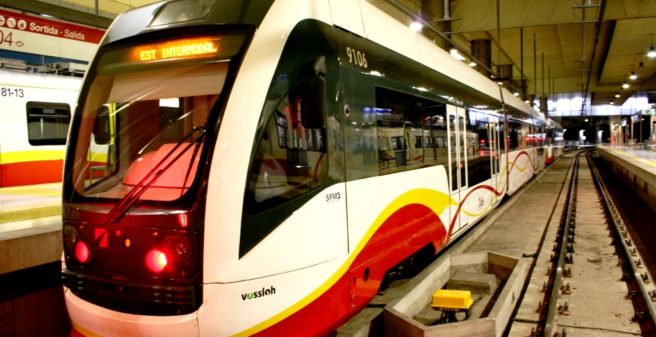 Mallorca’s regional train operator Serveis Ferroviaris de Mallorca (SFM) has launched a €2.4 million programme to improve services on its metre-gauge line between Palma and Sa Pobla. In addition to track renewal, the programme includes the reconstruction of the platforms at Sa Pobla, Llubí and Muro stations to allow low-floor boarding of the trains.

This works will be carried out to allow operation of the six TramTrain trains of 9100/9300 series from the beginning of 2022 which will serve the Palma – Sa Pobla line. These trains are still almost as good as new, but have been stored out of service for years already. Vossloh-Kiepe delivered the three-module units with low-floor entry from its factory near Valencia (now owned by Stadler) in 2010/11 for use on the 30 km long Manacor-Artà line in the east of the island. This route was to be rebuilt on the old trackbed of the diesel-operated regional train service which had been closed in 1977. Within Manacor city limits, 1 km of track in the middle of dual carriage street justiied the operation as a TramTrain. The severe economic and financial crisis 10 years ago prevented the completion of the project, and in the meantime it has been converted into a cycle track – although the option to re-convert it into modern rail line is to be maintained in the long term.

Starting in early 2022, the TramTrain units will take over most of the trips to Sa Pobla from the high-floor regional railcars of the 8100/8300 series from CAF currently in service here. They will operate between Palma Estación Intermodal and Marratxi as a non-stop service and then continue their journey via Inca to Sa Pobla. The suburban service between Palma and Marratxi will be provided by metro trainsets. After their delivery, the six TramTrain trains were only used for a very short period of time, operating as rush-hour express trains between Inca and Palma in 2013. They have since been stored out of service by SFM. Similar units operate on the Alicante tramway network – usually on the interurban line to Benidorm.