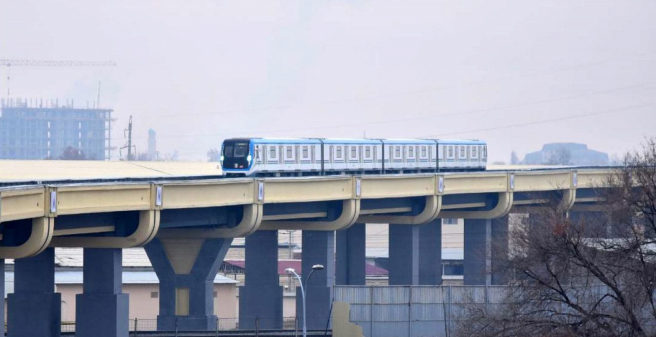 The new metro extension in Tashkent is mainly running on a viaduct I podrobno.uz

On 26 December 2020, the Sirgali line was inaugurated in Tashkent, capital of Uzbekistan. The line is de-facto an extension of the Chilonzor line. The opening ceremony was attended by the President of Uzbekistan, Shavkat Mirziyoyev and his secretaries.

The new section between Olmazor and Qipchoq stations is 7.1 km long, of which 580 m is underground. The remainder has been built as a viaduct. The extension comprises a total of five stations. All of them are decorated in the national style and have modern equipment, electronic turnstiles, escalators and lifts. 214 employees will work at the new stations. The planned daily ridership is of 35,000 passengers per day

Despite the difficult situation due to the pandemic, large-scale projects are carried out in Uzbekistan, with the aim to improve the quality of life for the population.

„Could anyone have imagined that the metro will come to Sergeli district? It happened today, which is very convenient for the citizens“, said President Mirziyoyev on the opening day. In addition, it is an environmentally-friendly mode of transport.

In 2020, the Tashkent Metro has something to be proud of – 19.3 km of tracks and 14 new stations were built. Earlier, 1.2 km northern extension of Yunusobod line and first 11 km section of Circle line were inaugurated on 29 August.

The metro construction in the capital continues. One more station of the Chilonzor line extension – Chinor – is planned to open next year. And within the next two to three years, five new stations will be added to the Circle line. In total, it will be 52.1 km long and have 35 stations in total.

Further information on Tashkent’s metro system can be found here: