More Bombardier Flexity Wien trams in service in Vienna – the end of the classic E1 trams? 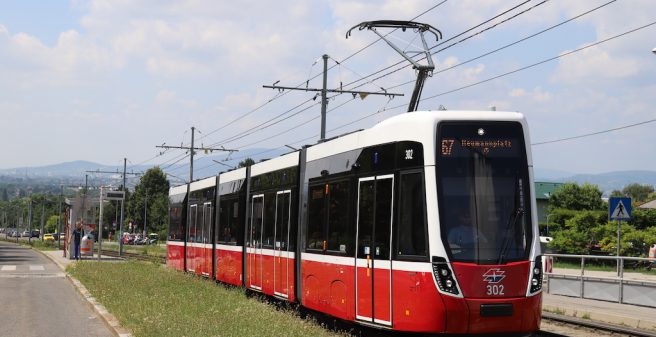 Vienna’s classic white-red E1 trams dominated the city’s landscape as no other means of transport – apart from the historical horse carriages. There is no film or documentary which was shot in Vienna without showing one of the stylish E1 trams. The E1-type motor cars and the c4 trailer cars were built in 1966 – 1977 and are part of the city ever since. The replacement has now started: Wiener Linien, the city’s public transport operator, is taking delivery of a total of 119 brand-new Bombardier low-floor trams.

According to Wiener Linien, there are still 21 E1+c4 trains in operation. However, the likelihood of encountering them in daily operation is shrinking. A bit more than a year ago, Wiener Linien launched the operation of its’ new Bombardier-built low-floor tram, called Flexity Wien or simply “Type D”. On 6 December 2018 the first Flexity Wien started operating on line 67 (Otto-Probst-Platz – Reumannplatz). Since September 2019, the Flexitys are operated on Linie 6 (Burggasse-Stadthalle – Geiereckstraße).

With the delivery of the new Flexitys, the number of E1 trams and c4 trailer cars is shrinking. At the end of October, operation ended on line 49. Since then, the E1 trams are only to be found on lines 25, 26, 30 and the Vienna Ring Tramway (a sight seeing line).

For years, Vienna used to be the “capital” of the so-called ULF trams. ULF stands for “Ultra Low Floor” and has been developed by SGP and Siemens in the 1990’s with an entrance height which is lower than the one for standard low-floor trams. The historic monuments protection authority prohibited the construction of tram platforms higher than the sidewalk curb. As a result, ULF has entrance height of 220 mm in comparison to 300 – 350 mm for conventional low-floor trams. Trolleys, wheelchairs and persons with reduced mobility can enter the vehicle from the sidewalk easily. For years, Vienna was the only city worldwide operating the innovative Siemens ULF trams. Siemens’ Simmering plant, located in the heart of Vienna, delivered a total of 332 ULF trams between 1998 and 2017.

The ULF’s main design characteristic is the bogie-less architecture with gangways and on motorised single axle wheels with the asynchronous motors mounted above the wheels. The ultra-low-floor centre sections were located in between those gangways, enabling the entrance height of 220 mm. Despite its unique design and advantage and many promotion tours, ULF unfortunately never became a “best-seller” outside Vienna. The only export was a small series of 10 A1-type ULF’s to Oradea, Romania, in 2008/09.

The existing contract between Siemens and Wiener Linien foresaw an option for a further 150 ULF trams. However, the operator decided otherwise and launched a new procurement tender in 2013. The final tender process was a race between incumbent supplier Siemens and Bombardier which also operates a manufacturing site in Vienna. At the end of 2014, the result of the tender was published: Bombardier won the contract to deliver 119 trams. After a claim, the delivery contract was signed in mid-2015 with a value of ca. 562 million Euros which includes a maintenance contract and the option for a further 37 trams.

Following the tradition of Wiener Linien’s designation scheme, the new tram has been called “Type D”. In the beginning, it was also called ELF for “Extra Low Floor” tram. Flexity Wien is the product name given by Bombardier.

In terms of technology, the tram is a mix between tailor-made tram for Vienna with a very low entrance height of 215 mm and standardisation: for instance, the bogie is based on Flexity Berlin tram and the steel carbody has its roots in the Flexity 2 platform. The exterior and interior design has been developed by the Döllmann design agency (Döllmann Design + Architektur ZR GmbH). In comparison to the ULF trams which incorporated a red-grey livery, the Flexitys are painted in a more friendly livery consisting in red, white and black-grey.

The tram is a classic multi-articulated tram with five sections and three bogies. It has a length of 33.81 m and a width of 2.38 m. In the interior, there are 62 seats and space for 211 standees. The six doors offer an entrance height of 215 mm whereas the interior floor height is located at 280 mm. Above the bogies, the floor height is ca. 350 mm. The height difference is surmounted via ramps in the interior of the tram and almost not noticeable by the passenger.

The Flexity operation in Vienna

In mid-2019, a total of four Flexity trams were already in operation in Vienna. In February 2020, there were eight Flexitys already in Vienna. Until the end of the year, there will be 17 Flexitys trams in Vienna. The next line to be equipped with Flexitys is line 11 (Otto-Probst-Platz – Kaiserebersdorf in Simmering) which already started operation in September 2019.

According to the delivery contract, the 119 Flexity’s shall be delivered until 2025 with a possibility to order another 37 trams until 2026. Whether or not this option will be drawn, merely depends on the extension of Vienna’s tram network.

From December 2018 until September 2019, the Flexitys were operated on line 67, however the vehicles are operational on the entire tram network. For this reason, the operator decided to start operating the new trams on line 6 in September 2019. The Flexitys are success: Both passengers and drivers like the new trams. This is due to the fact that the trams are fitted with air conditioning (Vienna’s summer can get very hot) and to the modern interior saloon with a lot of space.

Replacement of the aging E1 fleet

As a result of the delivery of the new Flexity trams, the classic E1 trams are withdrawn from service. This marks an important milestone in the history of Vienna’s tram system. The tram types E, E1 and E2 are the largest licence-built Düwag trams ever. Vienna’s trams are based on Düwag’S GT6 six-axle tram design. The first E-type car was built and delivered in 1959. Between 1959 and 1990, SGP (Simmering-Graz-Pauker, now Siemens) and Lohner/ Rotax (now Bombardier) delivered the entire fleet of E, E1 and E2 trams. While the E and E1 trams are rather close to the GT6 design, the E2 trams are based on the so-called “Mannheim-type” tram with larger side- and front-windows and a more modern electrical system.

In February, there were still 21 E1-type trams and 24 c4 trailers cars in service. At this point in time, it is unclear when the last E1 trams will be withdrawn from service. According to the operator, fleet requirements merely depend on extension projects and future frequency improvements. As a result, the “old trams” will be operated as long as they are needed. However it can be assumed that this will be the case in 2022 or 2023.

The oldest E1 cars are now 50 years old and have definitely reached the end of their life cycle. When put out of service, spare parts and important materials are dismantled in order to be used for the remaining fleet. The rest of the vehicle is then scrapped. A re-use as second-hand trams is not really attractive any more. Between 2001 and 2013, many E and E1 trams were sold to many European cities such as Braila (Romania), Craiova (Romania), Graz (Austria), Kraków (Poland), Miskolc (Hungary), Rotterdam (Netherlands), Sarajevo (Bosnia & Herzegowina) and Katowice/ Silesia (Poland). To date, E1 trams can still be found in operation in Braila, Craiova, Katowice/ Silesia, Kraków and Sarajevo.

E/E1 trams in the museum

Today, E1 trams can also be in several museums and collections. (source: https://www.strassenbahnjournal.at/wiki/index.php/Type_E1)

Another excellent article. One point of note however is that there is no word ‘overneath’ in English. We just use the word ‘above’.