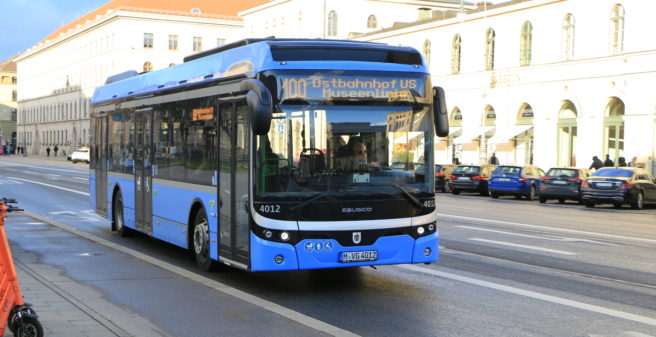 In early 2015, an Ebusco battery electric bus ran for the first time on Munich’s line 100, the so-called “museums line” from the main station via Odeonsplatz to Ostbahnhof. This was a demonstration vehicle on test in passenger service.

Three years later, in 2018, two Ebusco Type 2.1 e-buses were acquired by Munich’s municipal public transport MVG, it entered service with fleet numbers 4001 and 4002. Two EBUSCO 2.2 buses numbered 4011 and 4012 are on loan from the manufacturer and are in service mainly on line 100, too, since September 2019. The first two EBUSCO 2.2, which are purchased by the MVG were delivered in late 2019 and are numbered 4021 and 4022. The Electric 12m-buses of EBUSCO model 2.2 LF-12-HV 362 are equipped with 362 kWh lithium-iron phosphate traction batteries. The traction motor produces 124 kW, and the vehicles have passenger capacity of 31 seats and 59 standing places. In June 2020, two EBUSCO 3.0 are expected which are characterized in particular by significantly lower overall weight and subsequently a greater range. The two buses on loan, 4011 and 4012, will then be returned.

The MVG has ordered a further 16 buses, eight 12-meter solo buses from Ebusco and eight 18-meter articulated buses from EvoBus. Twelve of these buses now on order (eight 12m-buses and four articulated buses) will arrive before the end of the year. The remaining four will follow in 2021. In addition, as part of an innovation partnership with MAN, the first e-buses of this manufacturer are expected in Munich soon.

By 2021, the first bus depot only for electromobility will be built in the district of Moosach. For this purpose, 56 charging stations have already been ordered from the Polish manufacturer Ekoenergetyka-Polska. The acquisition costs for the 16 buses now on order, including the required charging infrastructure, is approx. twelve million euros. MVG’s intention is to raise funds from the federal and Bavarian state government.