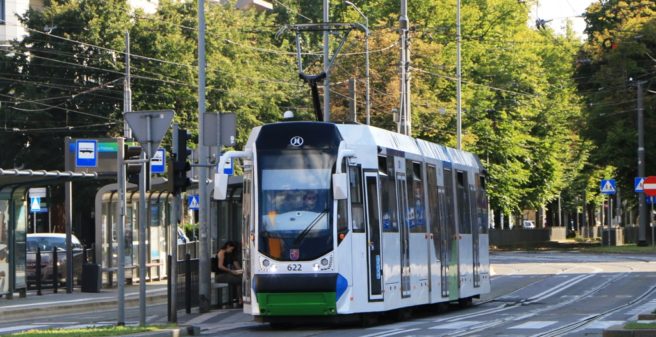 Poland’s tramway operators have significantly modernized their fleet over the past 20 years, but most cities still have a large number of older vehicles in daily service.

In Szczecin, in the very northwest of the country not far from the German border, the fleet is charactarized above all by the numerous Tatra tramcars (KT4 and T6) that were gradually taken over by BVG from the German capital and today account for a large proportion of the streetcar fleet. The low-floor era began with two series of a total of 28 Pesa 120 NaS/2s in service in 2011/12, but lack of funding has so far prevented the purchase of larger series of contemporary low-floor cars. The fleet also includes various modernized four-axle cars of the former Polish standard type Konstal 105N (different sub-series) and Moderus Alfa HF09 and HF10AC built in modified form by the Polish manufacturer Modertrans Poznań Sp. z o.o..

In order to gradually further increase the share of low-floor vehicles, the operator took delivery of four Moderus Beta MF 15 AC BD three-section, partially low-floor single-ended trams from Modertrans in Poznan, similar to the series supplied to other Polish cities. Cooperation with the manufacturer has proved successful – part of the final assembly is carried out in the workshops of Szczecin Transport Authority.

The current expansion program for the route network makes the procurement of additional new vehicles necessary. However, a tender process was started for only 2 more partially low-floor vehicles (with an option for 2 more) in 2019, this time of bi-directional design. The order was again placed with Modertrans. The first Moderus Beta MF 29 AC BD arrived in Szczecin in December 2020, and after completion and acceptance testing both vehicles have been in regular service since spring 2021. The option for two more vehicles has now been converted into a firm order, and the vehicles are expected to arrive in the next few months. Polish supplier ENIKA delivered the complete motive power transmission and control systems for the new trams.

Some technical data of the Moderus Beta MF 29 AC BD:

– Passenger information system (visual – acoustic), monitors inside and outside

– in each segment, two double sockets for USB connections for charging cell phones are installed in the passenger area.

Procurement of additional low-floor tramcars for the Szczecin tramway network is on the agenda, but depends on the provision of the necessary funding – currently Tramwaje Szczecińskie has not yet launched another tender.

A route map and additional information can be found at:
http://www.urbanrail.net/eu/pl/szczn/szczecin.htm
and
http://www.robert-schwandl.de/pol/