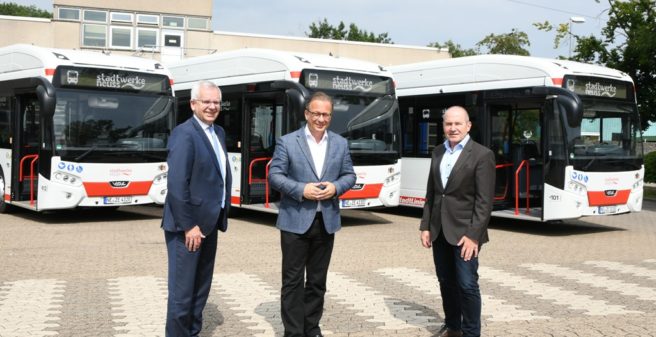 From left to right: Stadtwerke managing director Stephan Lommetz, mayor Reiner Breuer and Stadtwerke division manager for local transport Uwe Koppelmann at the handover in front of ebus 412 (left), 411 and the articulated no. 101 | © Stadtwerke Neuss

9 August 2021: As part of the modernisation of its bus fleet, Stadtwerke Neuss took  delivery of three battery electric buses of the Citea series from Dutch bus manufacturer VDL at its Moselstraße depot. The buses are two 12-metre buses of the “Citea SLF-120/electric” model (nos. 411 and 412) and an 18-metre long articulated bus of the “Citea SLFA-180/electric” model (no. 101). The purchase price for all three coaches together amounts to 1.8 million euros, for which the state of North Rhine-Westphalia has provided a subsidy of 700,000 euros. Stadtwerke Neuss Managing Director Stephan Lommetz: “We stick to our goal of electrifying the entire bus fleet in the years to come.”

All three are to run in future on route 842 (Lukaskrankenhaus – Stadtzentrum – Rheinpark-Center.

The new electric buses will replace three older diesel buses. Stadtwerke Neuss assumes an average annual mileage of about 50,000 kilometres for all three. Thus, the Stadtwerke expect a CO2 saving of 165 tonnes per year and a reduction in annual diesel consumption of 62,500 litres.

Mayor Breuer: “The new electric buses play an important role in the integrated climate protection concept of the city of Neuss. After all, electric buses are indispensable for noise- and emission-free mobility in cities. Not only can local public transport play its part in achieving the goals of the Paris Climate Agreement and reducing CO2 emissions, but we also want to reduce noise levels and improve the quality of the air we breathe.”

The three VDLs are not the first electric buses in Neuss, but they are the first to be permanently owned by Neuss Stadtwerke. On the one hand, neighbouring company Rheinbahn from Düsseldorf operates its line 833 with electric buses, and this line also comes to Neuss city territory. On the other hand, Stadtwerke Neuss already had a Sileo S 18 as a demonstration vehicle under car number 801, which has since returned to its manufacturer.

The three electric buses in Neuss are equipped for recharging via roof-mounted pantographs on the line. However, there is still only one charging station at the depot, which was already set up in 2018 with a transformer station with a capacity of 800 kW for the Sileo demonstration vehicle. Its charging device is installed under the roof of the bus hall, and at the push of a button the pantograph rises from the bus to this charging station.

Uwe Koppelmann, head of the local transport division of Stadtwerke Neuss, says: “With a battery that is 80 % empty, we assume a charging time of up to four hours for the two solo coaches and up to six hours for the articulated coach until the batteries are fully charged again.” If the batteries are recharged on the line, the time until the car is fully charged again is significantly reduced. “We want to achieve that the electric buses reliably manage 250 kilometres between two charges.”

A heat pump provides heating and air conditioning. In addition, the new VDL Citea have WLAN, and they are equipped with video surveillance. And in particular they have a feature that has only recently found its way into bus construction: a side turn assistant warns the driver visually and acoustically if, for example, a cyclist is in the blind spot next to the bus when turning.

For the time being, the three electric buses are only used as reinforcements, returning to the depot after a short period of use. However, the Stadtwerke assumes a range of 250 kilometres for the two 12-metre-buses and 200 kilometres for the articulated ebus.

The charging station on the line is currently being planned at the Rheinpark-Center terminus.