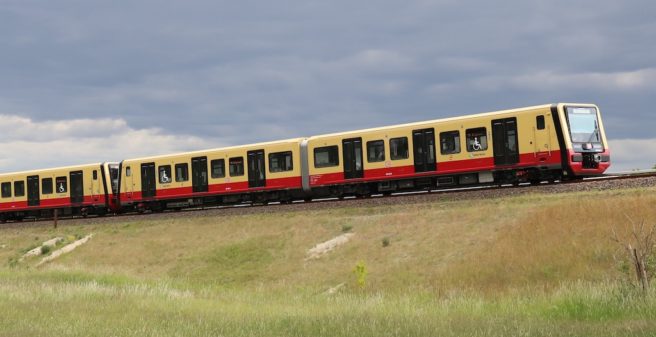 The countdown is running! Only a few more months before Berlin’s new S-Bahn goes into operation. Since the beginning of September 2019, the first train ran through the network for testing, initially only at night. But now the 483/484 series is also being testing during daylights. Since the beginning of May, a six-car train train is being tested on the S-Bahn network Berlin and Brandenburg. The trainset has been decorated with the following slogans in green, yellow, blue and pink:

The train has been touring with these slogans since May for the 40,000 km endurance test in Berlin and Brandenburg. Testing included regular tests on the new S-Bahn line between Schönefeld Airport and the future BER airport train station as well as on the ring line. The purpose of the endurance test is mainly to approve the trains’s main functions such as starting off, braking, opening and closing the doors. The tests are performed 24 hours a day, seven days a week. With the 800 to 1,000 kilometers of mileage planned every day, this endurance test will probably take until the beginning of July. The program is only interrupted by regular technical checks and inspections in the workshop.

Start of operation in December 2020

A total of ten pre-series trains will go into operation on New Year’s Day 2021, first on the S47 (Spindlersfeld – Hermannstraße) line, later also on the S46 (Königs Wusterhausen – Westend), S8 (Zeuthen – Birkenwerder) and S41 / 42 (Ringbahn) lines. The vehicles will have been tested for two years beforehand in order to remedy any defects in good time before commissioning. They were tested in the world’s largest test center for rail vehicles, the testing and validation center of Siemens Mobility in Wegberg-Wildenrath (NRW). In addition, a train was brought to Vienna to test it to extreme weather conditions in the Rail Tec Arsenal (RTA) climate wind tunnel. So far, Berlin’s new S-Bahn passed all tests successfully. Here’s a quick look at the video that has now appeared on the S-Bahn Berlin YouTube channel:

Deutsche Bahn has ordered a total of 382 new S-Bahn cars from the Siemens / Stadler consortium. The trains are manufactured at the various Stadler locations in the Berlin-Brandenburg region. Stadler is supplying the mechanical components and Siemens the electrical equipment. The first car body was completed in October 2017 and transferred to final assembly at the Stadler Pankow plant. The first vehicle was shown during InnoTrans 2018 in Berlin for the first time. Delivery of the series trains has now started.

With 21 two-car multiple units (class 483) and 85 four-car multiple units (series 484), the reliability and quality of the transport service on the ring railway and the south-eastern routes will be significantly increased as the older fleet from the 1980’s will eventually be replaced. Siemens and Stadler guarantee a high quality of use for over 30 years for the new series. The delivery contract from 2015 also includes a framework contract for up to 1,380 cars, which could be used in future for the North-South S-Bahn tender which is currently under preparation. We reported here:

At first glance the future home of the new trains is easy to be recognised: the commuter rail system S-Bahn Berlin in the Berlin/ Brandenburg region. The colour scheme of the new trains is based on the traditional colours of the Berlin S-Bahn in red, yellowish gold and some black elements. The head design, which is already nicknamed “light switch” among railway fans, may take some getting used to, but is looking modern overall.

In contrast to the predecessor vehicles, the four-car series is fully connected by bellows. For the first time in the S-Bahn Berlin, the trains are equipped with air conditioning. New colours and patterns can be also found in the interior. The seats were kept in shades of blue typical of the DB. The spaces in the multi-purpose area were marked with logos on the floor to simplify passenger flow and orientation.

The trains have a width of 3.14 m. The 36.8 m long 2-car quarter train has 94 standing and 80 seats, including 20 folding seats. The 73.6 m long 4-car semi-train has 202 standing and 184 seats, including 40 folding seats. Each car has three 1300 mm wide doors for passengers on each side, and the end cars each have a door to the driver’s cab. Cameras support the monitoring of passenger changes so that there is no need for exterior mirrors.

Particular attention was paid to the reliability and availability of the new trains. In the quarter-train (series 483), all drive-relevant components have been doubled. Six of the eight axes are each equipped with 140 kW motors, for a total of 840 kW. In the event of a drive malfunction, only one car fails. The other car of the quarter train remains fully powered and thereforeoperational. The semi-train (series 484) is equipped with 12 motors, each 140 kW, totaling 1,680 kW drive power.

Each quarter train has a magnetic rail brake, each half train has two. This ensures safe braking even in unfavorable weather conditions – without having to accept restrictions (e.g. speed reductions). The maximum speed is 100 km / h. As known with the S-Bahn Berlin, the power transmission takes place via the third rail with 750V DC.