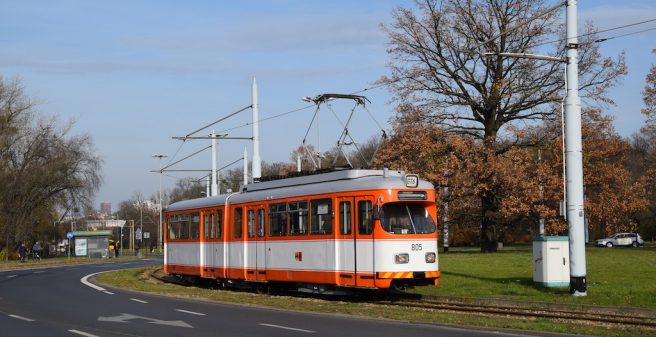 It is not an ordinary historical tramcar that rolled out of the depot Chocianowice in mid-November 2019. It stands for almost 30 years of cooperation between Germany and Poland and is thus a symbol of German-Polish, or Polish-German, friendship. Because identical vehicles were brought in 1990 for the first time from Bielefeld to Łódź to support the tram operation after the political transition. The cooperation and friendship between the two cities still exists today between the public transport companies as well as between tram enthousiasts.

The GT6 numbered 805 is a very special gem for many fans. It is the latest museum car of the tram club KMST (Klub Miłośników Starych Tramwajów) in Łódź, which was painted in the orange and white livery of Stadtwerke Bielefeld. In 1990, 29 years ago, MPK Łódź received eight such vehicles, some of which were used in this color scheme. Tramcar 805 came as No. 38 (then 1038) to Łódź in 2009 only, but is identical to the eight initial GT6, one of which (No. 42, now 4042, built in 1957) has also survived. The orange-and-white GT6 805 thus represents the era of German tram cars in Łódź and will be used from now on for special trips. In 1994, TP (Tramwaje Podmiejskie) was founded for the suburban tram operation of line 43 and was responsible for the GT6 trams until 2012.

In Innsbruck, the center section of the GT8 was installed in an ex Hagen GT6 bidirectional car (No. 89). In 2009, one of the two of Łódź’s suburban tram operators, the MKT (Międzygminna Komunikacja Tramwajowa) took over a number of GT8 and GT6 trams from Innsbruck, Mannheim and Freiburg. Innsbruck GT6 No. 38 was part of this deal and operated from now on on the suburban tram line 46 to Ozorków.

After arriving at the MKT depot in 2009, the car no. 38 received an orange-yellow color scheme. With the takeover of the suburban tram operations of MKT and TP by the municipal transport company MPK, also some of the second hand trams came into the car stock of the MPK and were painted in MPK’s color scheme red-yellow. Car 38 was numbered 1038 (the 1 stands for the depot Telefoniczna)

The financing has been ensured thanks to a microcredit from the Łódź OPUS Center with an deposit of only 1 % by KMST. OPUS is an urban charity project that also supports associations. The refurbishment of the historic tram car was therefore co-financed by the Lodz Plus 2019 program run by the OPUS Center, which was financed by the Local Government of Lodz and the Citizens’ Initiative Fund Program 2014-2020.

Until 2 July 2019, tram 1038 was in service on the tram line 7A / 9. The city of Łódź approved the restoration in September 2019. Thanks to the good technical condition it was possible to start immediately with the restoration work.

As part of the work, the car body was also repaired. Corroded and damaged metal parts were replaced, deposits removed and many details restored. One of the most iconic features are the rectangular headlights. So far, tramcar 1038 had smaller spotlights. The KMST was able to organize original parts in order to give the tram its authentic look.

The restoration was supported by members and fans of KMST in many hours of volunteer work. Thanks to the great commitment of MPK Łódź, the project has been implemented professionally.

Other tram services, including the MPK Kraków and the tram Elbląg (Tramwaje Elbląskie) also helped and provided valuable information. In addition, other tram friends from Germany, Austria and the USA helped also.

The cooperation between Łódź – Bielefeld: a long history

In addition to the GT6 takeover in 1990 and 2009, strong cooperation links the two cities and their respective tram operators. In 2013, the MPK Łódź took over a total of 14 M8C tramcars of which 13 were completely modernized until 2019 and equipped with a low-floor middle section. The 14th was used for spare parts.

For these reasons, KMST has decided to emphasize the long-standing cooperation between the cities symbolically through the restoration with its original Bielefeld livery and vehicle number. The KMST is working on further details and would like to restore the historical appearance in the interior.

The premiere of the historic car in the new colors took place in the night of 15 to 16 November 2019. The main attraction was a trip on the overland line 41 to Pabianice which will be modernized beginning of December 2019.

The author thanks the tram club KMST and Paweł Kaźmierczak for all their pictures and valuable information.

Further information and pictures are available on the website of the KMST: