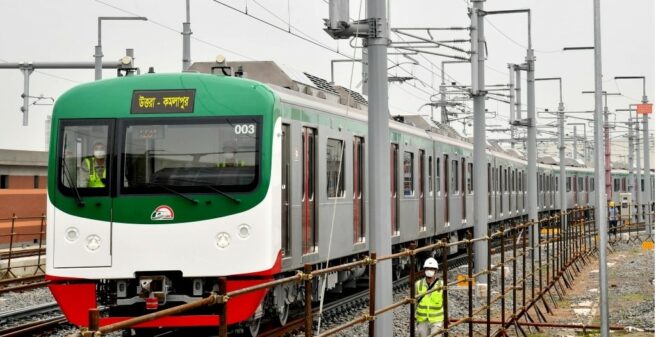 Traffic problems in Dhaka, the capital of Bangladesh, are legendary and congestion levels make commuting difficult and time-consuming. Public transport in the city usually refers to numerous motorbuses, minibuses and rikshas, which are frequently old and lack of maintenance. Construction of a metro system has long been considered as essential to improve the situation, but was delayed for quite some time, partly due to financing constrains. Approximately 10 years ago, the decision was made to build a network with initially six lines, which was then reduced to five for the time being.

After five years of construction, the first section started commercial operation today, 28 December 2022 – thus, Bangladesh is now one of world’s “metro countries”. Prime Minister Sheik Hasina took a ride in one of the first trains.

Dhaka Mass Transit Company Limited (DMTCL) is the operator of the first line, which started scheduled services as a section of Line 6 over 11.7 km of track with nine stops between Uttara North and Arargaon. It runs completely elevated as an elevated railway, all tracks except for the depot area are elevated. The new metro uses 1,500 V DC power supplied from a catenary and runs on 1,435 mm standard gauge. In 2024, the first line will serve eight more stops, bringing it even closer to the traditional city centre. This section will be 9.5 km long, with the terminus at Kamalapur not far from Dhaka’s main railway station, where interchange to the planned metro lines 1, 2 and 4 will also be provided in the future.

Initially, about 17,000 passengers are expected, and in the future up to 60,000 passengers on the complete Line 6. They will be carried by 24 six-car metro trainsets, each section being 19.8m long, 2.95m wide and 4.1m high. Kawasaki Heavy Industries (KHI) and Mitsubishi Corporation are supplying the trains and are responsible for long-term maintenance. The trains stop at 180m long platforms, which are thus also equipped for future capacity expansions. The current six-car compositions offer 306 seats and up to 1,700 standing places.

The Japan International Cooperation Agency (JICA) is responsible for 75% of the funding, or about $2.13bn, with the remaining $690m coming from the central government of Bangladesh.

The next phase is scheduled for 2026, when Line 1 will open and connect to the international airport with the city. In approximately ten years from now, Lines 1, 2, 4, 5 and 6 are expected to be operational. By any means an ambitious target.