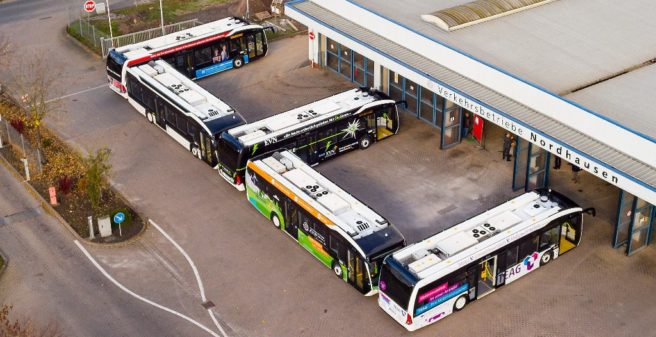 Presentation of the new Sileo S 12 in Nordhausen | © Kreis Nordhausen

In 2013, a new bus manufacturer was established in Salzgitter, Germany: Sileo – a company specialised in the construction of electric buses from the very beginning. Salzgitter had been an important location in German bus construction since 1969, when the renowned commercial vehicle manufacturer Büssing moved the production of its trucks and buses from the outdated factory site at Heinrich-Büssing-Ring in Braunschweig to a completely new, modern factory in Salzgitter-Watenstedt. In this factory, bus production continued after the takeover of Büssing by MAN in the early 1970s. With Sileo, the tradition of bus construction in Salzgitter now continues. It is interesting that the Sileo plant is only about one kilometre away from the MAN factory.

Just one year after its launch, Sileo already sent its first demonstration vehicles to different transport companies in 2014. One example is the SWB in Bonn, where four Sileo electric buses were tested: two Sileo S 10,7 as well as one Sileo S 12 (12-metres model) and one S 18 (articulated electric bus). Between January and April 2016, SWB received six Sileo S 12 (no. 1501 to 1506), which were followed by another Sileo S 12 (no. 1801) during spring 2018.

On 28 October 2020, Sileo handed over five Sileo S 12 electric buses to the transport authority of the Nordhausen district of Thuringia. The sixth vehicle on order will follow in December 2020. They are not the first electric buses in Thuringia, but they are among the very first in this federal state. Other buses with this new engine technology run in Bad Langensalza (at the private city transport operator König – Sileo also supplied these vehicles), in Jena (for its city transport operator JeNah) and in Eisenach where it is called the “Wartburgmobil” (used on the Eisenach city line 2).

In the presence of the Thuringian State Secretary for the Environment, Olaf Möller, Sileo handed over the new electric buses to District Administrator Matthias Jendricke from the Nordhausen district and Thorsten Schwarz, the Managing Director of the transport companies.

Nordhausen’s new electric buses are so-called “depot chargers”, which means that they are essentially charged overnight at the depot. They follow the same charging technology as the Sileo in Langensalza. In the Nordhausen area, however, there will be two additional charging stations for recharging during the day shift in Niedersachswerfen.

Charging is via the “standardised combined charging system 2 (CCS2)” in cooperation with “Schaltbau”. One interesting feature needs to be noted: the charging infrastructure is already planned so that more than 20 ebuses can be charged at the depot in parallel. Sileo has promised a battery range of at least 170 kilometres, both during summer and winter.

In Nordhausen, the Fraunhofer Institute acted as technical advisor on the concept for the procurement of the electric buses and the specification of the charging infrastructure. Key criteria for the award of the contract were not only that the new electric buses should actually achieve the required range, but also the efficient heat pump system for heating and air-conditioning.

At the handover of the buses, State Secretary Olaf Möller pointed out that the new Sileo S 12 buses do not emit around 100 tonnes of CO2 per year compared to the diesel buses used until recently. This would correspond to the combustion residues of 38,000 litres of diesel. And transport company managing director Thorsten Schwarz called the new Sileo electric buses “designer pieces with high driving comfort for drivers and passengers”.