New tracks for the tram in Daugavpils 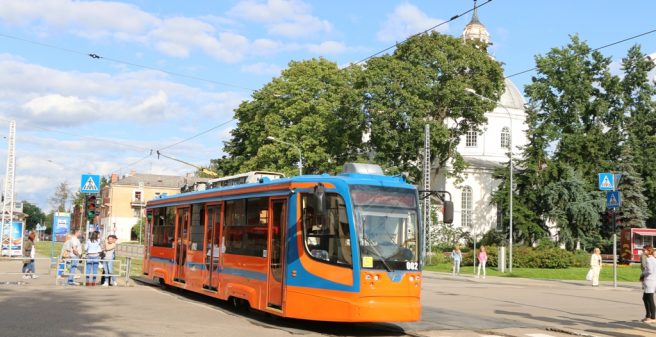 The small tramway system in Daugavpils in Latvia gets more new low-floor vehicles and a new branch line is under construction.

With only three lines in operation the tramway system of the city of Daugavpils is – in comparison to the eight-route system in the capital Riga – undoubtedly the smaller one of the two existing systems in Latvia. Because of several single-track sections, sometimes passing through quiet suburban streets, sometimes running through dense forests, as well as an interesting fleet of various different models and series make Daugavpils an interesting location for tramway enthusiasts, but not necessarily so for the daily passengers who are doomend to use the trams. Nevertheless, the tram is considered the backbone of public transport for the 130,000 inhabitants, and various efforts have been made over the past few years to gradually modernize the vehicles and the infrastructre. Most recently, new cars were added to the fleet in 2013, eight four-axle vehicles and, for the first time, four articulated vehicles, which are mainly used during weekdays‘ rush hour.

A tender process for new low-floor trams started in 2018, which was finally declared void after intially proclaiming that Belkommunmash from Belarus would be the winner. Consequently, a new tender was launched with the Russian consortium PK Transport Systeme/Transmashholding in St. Petersburg as ist winner. The consortium will deliver the first of eight new trams of its „CityStar“ model range already before the end of this summer. Something similar had happened before, during the 2013 purchase program of 12 new tramcars, which were finally produced by KTM from Russia instead of Belkommunmash. The trams on order will replace all the remaining Tatra T3D ex Schwerin/Germany, used mainly for rush hour extras and which never performed too well in Latvia, as well as the Russian standard tramcars of KTM 5 type. With some 30 years of operation these trams have considerably exceeded their expected useful life cycle. All trams in Daugavpils, including the new ones, use the trolley current collector.

The city is in favor of the tramway and actively supports its modernization and expansion plans. As a consequence, not only the existing infrastructure is being upgraded gradually and new vehicles are purchased, but also a complete new tram section is under construction – the first one in decades. The new 1.2 km strech actually is a deviation of the existing tram line 3, in order to better service a large hospital complex. The current and actually shorter section will be out of service, although maintained for the time being. All trams of route 3 to Stropi will use the new track. Completion is expected in the second half of 2019. The new section is a single-track throughout and it is built in Russian standard gauge of 1524mm, like the rest of the system. This is clearly a legacy of the origines of the system during the Sowjet era – the first trams started operating in 1946.