New trains for the Circumvesuviana 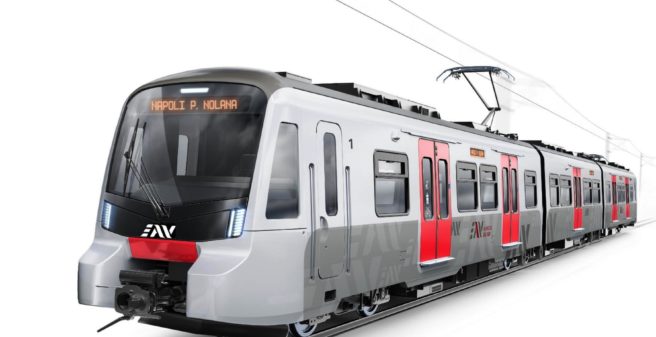 The approximately 148 km long network of the Circumvesuvia electric, narrow-gauge railway provides an extensive, metro-like urban and suburban public transport service in the greater area east of the city of Naples. The infrastructure and rolling stock are both in urgent need for new investments.

Now Stadler Rail Group has been awarded by EAV S.r.l. – the operator of public transport in the region Campania with the Framework Agreement for the supply of 40 new electric train sets for these 950mm gauge lines. The Framework Agreement will include the full-service maintenance of the trains for a period of 5 years after their commissioning. The first application contract, under the Framework Agreement, provides for the supply of 23 vehicles. With the acquisition of the new fleet, the oldest vehicles will be progressively replaced and the quality and range of transport services will be increased, improving the travel experience of passengers by usage of modern vehicles that meet the latest standards in terms of reliability and safety.

The new electric trains consist of three cars made of aluminum and designed to reduce the overall weight of the vehicle, in order to significantly reduce energy consumption. With an overall length of around 40 metres, the new trains offer five doors on each side to allow rapid passenger interchange in stations; an optimal passenger flow on board will be granted by a modern and flush design of the interiors. These features are particularly advantageous for people with reduced mobility, who will be able to move easily throughout the interior of the train thanks to the wide corridor. The new trains will be manufactured at Stadler Valencia on the Spanish Meditarranean coast.

The Circumvesuviana originally was a steam-operated narrow-gauge railway network, which was gradually electrified and further extended by 1926. Expansion continued until 1948, when the Spa-town of Sorrento on the Gulf of Naples was reached, but additional minor extensions were opened in 2001 and 2004.