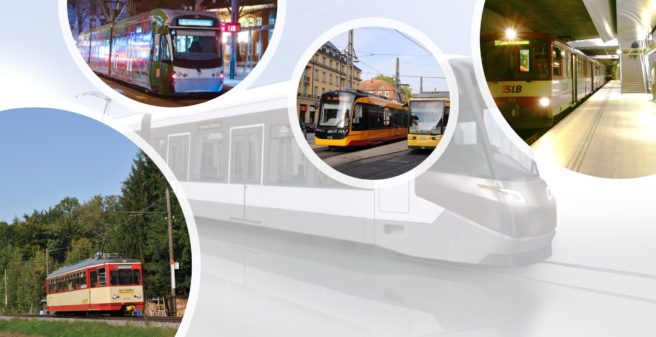 German and Austrian tram train operators have defined the tram train of the future together with the Association of German Transport Companies (VDV). It will enable to carry on the success story of the Karlsruhe tram train model not only in Karlsruhe, but also in other regions in both countries. As part of the so-called VDV-Tram-Train project, six German-speaking transport operators have now put 504 regional light rail vehicles out to tender and are waiting for offers from the vehicle manufacturers in the upcoming months. Preparations for the invitation to tender, in particular the creation of the specifications, have been going on since 2017.

In addition to vehicle development, production and -commissioning, a 32 year maintenance contract with the manufacturer is planned. This creates a total project volume of around 4 billion euros. “This is an unprecedented project we can all be proud of. I am glad and relieved that our three years of joint work is now bearing fruit. Now we are very much looking forward to the offers ”, emphasizes Ascan Egerer, technical director the Albtal-Verkehrs-Gesellschaft (AVG) and the Karlsruhe transport company (VBK). The Karlsruhe operator is responsible for the overall project management.

Six operators in Germany and Austria

The project partners VBK, AVG, Saarbahn, Schiene Oberösterreich (=Rail Upper Austria), the State of Salzburg and the regional light rail Neckar-Alb association want to save up to one million euros per vehicle by achieving scale effects. “That was the objective from the start, in order to make the tram-trains more economic than conventional and standardised mainline rail multiple units. The industrial dialogue that we are having as part of the project with well-known rail vehicle manufacturers have shown that for on the one hand, the desired significant savings are possible for all partners and on the other others that the requirements of our technical specifications from the manufacturer can actually be implemented”, explains project manager Thorsten Erlenkötter from the VBK. There will be a standard vehicle development for which the partners share development and approval costs: that is an essential savings point. Furthermore, five variants are to be produced the operator-specific requirements such entry height, paintwork, bi- or uni-directional layout and interior layouts.

With the exception of the expansion project for the Salzburger Lokalbahn and the Neckar-Alb regional light rail project, all operators are replacing mainly “older vehicles” from the 1990s and 2000s. The Neckar-Alb regional light rail (RSB) is a 205 km long, planned two-system light rail system, which, based on the Karlsruhe model, is to connect existing railway and new tram routes in Tübingen and Reutlingen. A total of 45 km of new lines and reactivations are planned. The first routes and route extensions have already been approved, so that the opening can be expected in 2025 at the earliest.

In the German state of Baden-Württemberg, Karlsruhe’s AVG and Land Transport Authority for the regional light rail Neckar-Alb are procuring and financing vehicles together. The fleet will be financed and procured by Baden-Württemberg’s Rail Vehicle Company (SFBW). As these trains will be dual-system tram trains, these will be fitted with toilets. This is a requirement which will not be required in all vehicles in Upper Austria.

In Upper Austria, the older trains of the Linz Local Railway (LILO) and the Local Railway Lambach-Vorchdorf-Eggenberg will be replaced. The fleets are partly consisting in almost 70 years old vehicles such as the ET20 (Westwaggon / Rastatt), years of construction 1953 – 1956 and the ET22 series from the Cologne-Frechen-Benzelrath Railway, built between 1953 and 1954.

First new vehicles for Saarbrücken in 2024

Saarbrücken’s Saarbahn procures the basic variant and will therefore receive the first vehicles. The transport operator expects the first four pre-series vehicles in July 2024 which will then replace the first generation tram trains, built in 1996 – 1997. The AVG Karlsruhe and the Saarbahn Saarbrücken are the project partners who already have successfully operated a regional light rail system for decades. The other four Operators are introducing new connections between city and region and benefit from the experienced partners. “The exchange of experiences was also a essential goal of our joint project. Because the beauty of our is: we are not competitors, we all have one thing in common. The aim is to convince as many people as possible to switch from cars to public transport. This requires attractive offers, such as the tram-train systems in Karlsruhe and Saarbrücken show ”, explains Martin Schmitz, Managing Director Technology at VDV.

The delivery of the new VDV tram train vehicles will extend over a total period of ten years. “We also put the maintenance contract out to tender. That has the advantage that over the duration of the planned vehicle lifetime, the manufacturer is responsible for maintenance and so that consistently good quality and availability are guaranteed “, explains Thorsten Erlenkötter. According experts, the firm order size will be between 250 and 350 vehicles in the mid-term. If all planned tram train projects will be implemented in all regions, the number of tram train vehicles will achieve the maximum number of 504 trains in the long-term.

Chemnitz and Kassel not participating

For some experts it is surprising that the Chemnitz City-Bahn tram train system is no longer part of the tender. Just a few months ago, the operator had assured participation in the tender. Regiotram Kassel, which uses both electric two-system and diesel-electric TramTrains, is still not part of the project.