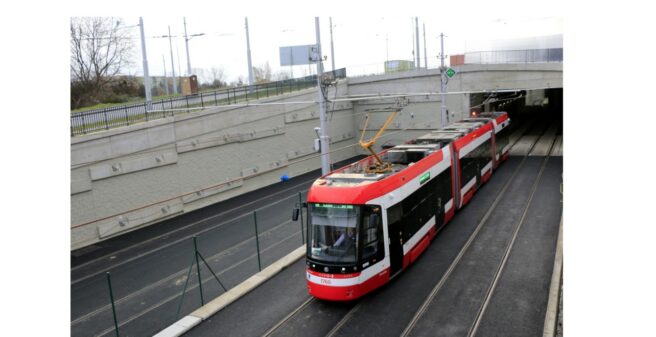 Škoda ForCity Smart 45T no. 1760 on the new section of line 8 on the first day of operation | © Martin Harák

The first delivered new Škoda ForCity Smart 45T tramcar, number 1760, was tested on the Brno DPMB network throughout November 2022. We reported on the delivery of this first vehicle here: https://www.urban-transport-magazine.com/en/skoda-drei-staedte-drei-neue-trams-und-ein-neuer-o-busauftrag/ . Another tram of this type is scheduled to arrive in Brno by the end of 2022, and the remaining three trams in spring 2023. A total of 40 Škoda 45T trams have been ordered (in part as option). The new trams also operate on the 900-metre extension of line 8 Osová – Nemocnice Bohunice opened on 11 December 2022 and runs partly underground.

The new Pragoimex EVO 2 “DRAK” articulated trams are continuously assembled in the tram workshops. This year 7 units (nos. 1840-1846) were produced, after New Year the production of one more car (no.1847) is planned. The last 3 old Tatra K2 articulated trams will remain in the fleet until further notice.

In November 2022 the first 2 trolleybuses SOR TNS 12/Rail Electronics CZ were completed at the trolley depot in Komín. The trolleys are numbered 3065 and 3066. The contract provides for DPMB to assemble up to 40 trolleybuses of the type SOR TNS 12/Rail Electronics CZ from partial sets by 2025. In the same manner, but with Škoda electric equipment, a further 40 vehicles are to be built – as type 32 Tr and under a framework agreement, too. So far, ten of these vehicles have been ordered for delivery in 2023.

In 2022, a total of 19 Škoda 27 Tr articulated trolleybuses with Solaris Urbino 18 IV bodies and Škoda electric equipment (numbers 3668-3686) were delivered. After the New Year, the last new trolley, numbered 3687, will follow and complete the series of a total 40 units.

There are no more Škoda 15Tr trolleybuses in service, only coach 3505 is still available as a reserve and ready for use. The same applies to the Škoda 22Tr series, of which only coach 3605 remains as a reserve. All other cars of this model series, which was not widely used, are scrapped. The last 4 trolleybuses of the well-known Škoda 14 TrM model (numbers 3256, 3259, 3274, and 3279) continue to operate in Brno as the only remaining high-floor trolleybuses in the fleet. The others are scrapped or given away, for example the vehicles 3280 and 3284 were taken over as a donation as part of the aid for the Ukraine. In addition, all Škoda 25Tr articulated trolleybuses (nos. 3609-3617) were decommissioned and sold to Ústí nad Labem during 2022.