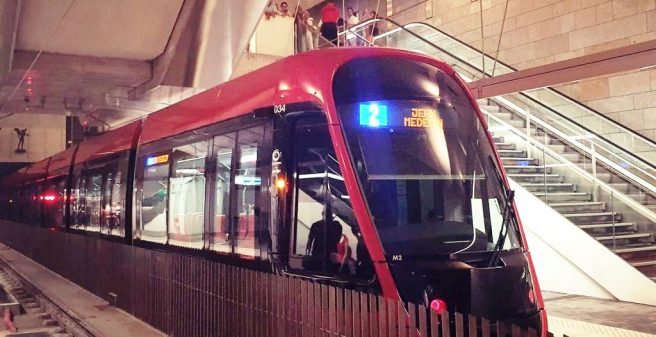 Starting date was Friday 28 June at 15:30h: Nice’s second tramway now reaches the inner city center via a new tunnel section. T2 has been extended three stops and some 1.7 km from the previous terminus at Magnan to Jean Médecin where a new interchange facility to the older tram line T1 has been created. However, as T1 entirely runs on surface, there is no physical connection between both lines, and each system also has its own depot and workshops. While T1 uses high-capacity traction batteries for power supply on a short section without catenary in the inner city area while on the T2 overhead is installed only on some 20% of the entire route. The tramcars charge their high capacities lithium Ion cells called „Ecopacks“ using Alstom’s SRS ground-based static charging at each stop. SRS automatically charges the tram when stopped during passenger exchange in less than 20 seconds. Alstom supplied 25 (+ an option of 12) Citadis 405A tram cars. The vehicles are 44m long, 2.65m wide and have a total capacity of 300 passengers, thereof 82 seated.

T2 had already started operation on the section between CADAM and Magnan (7 km) on 30 June last year; a 1.7 km link to the airport was added on 15 Dec 2018. Locally the new tramway is referred to as Ligne Ouest-Est.

Inaugurated in 2007, the Citadis trams of line T1 use NiMH (nickel metal hydride) batteries with 52 kWh capacity which were developed by Alstom / Saft. Since only one approx. 500 m track section is used without overhead lines, the charging takes place via the current collector under the overhead line. The Ecopack containers on the roofs of the Citadis vehicles on line 2 are JSR Micro ULTIMO Lithium Ion Capacitor Prismatic Cells energy storage units with a very high charging speed and a total capacity of 13.5 kWh each. The charging takes place at 750 V with 1200 A at the 15 stops equipped with the SRS (Système automatique de recharge statique) at ground level.

The final stretch of T2 under construction is the three-stops connection from Jean Médecin to Port Lympia which is scheduled to open in early autumn 2019.

Towards the end of 2019 a third tramway route will open in Nice. T3 starts at the airport, shares the tracks of T2 four stops until Digue des Francias and runs another 6 stops to Saint-Isidore. Another 2 stops might be added later.

A detailed map is available at: