No tramway: Little progress in Perpignan 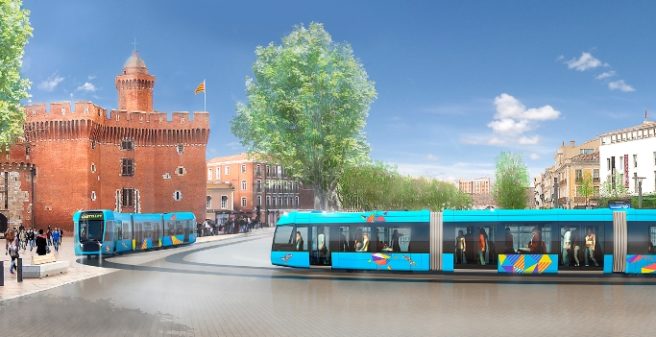 Without question, France is undoubtedly the leading country in Europe when it comes to the (re-)introduction of modern tramway systems: Today, tramways operate in 28 French cities, and a few more might follow in the future. However, most of the typical mid-sized towns and metropolitan areas already operate sophisticated tramway systems.

Perpignan – with a city population of 120.000 and 267.000 in the greater metropolitan area – is located in France’s southernmost Département Pyrénées-Orientales within the region Occitanie. Most larger cities in the country already have a rail-based urban transport system, and Perpignan itself has been studying and planning the introduction of a tramway system for almost 20 years. Different route options were analysed over the years, and in 2016 even a cross-town cableway “téléphérique urbain” was planned but not implemented.

Most recently and as a first important step, the introduction of a low-floor tramway on a cross-town trunk was on the agenda of the city council. The 180 million EUR project was part of the political program of previous mayor Jean-Marc Pujol, who promised to introduce a modern low-floor tramway system by 2026. However, the political constellation in the municipal administration changed after the September 2020 local elections, when Louis Aliot of the right-wing Rassemblement national was elected as new mayor. He cancelled the tram project right away, although his party only won a political majority in the city parliament but not in the greater metropolitan are of Perpignan with approximately 267,000 inhabitants. For the time being, however, there is little hope for the reintroduction of tramways in the city.

A brief history of electric transport in the city

Previously, the trams of the city were in operation between 1900 and 1955, when the country-wide anti-tram policy also lead to the final abandonment of the old system. Electric public transport continued for some time by means of trolleybusses, but this system did not reach any significant size with only 16 vehicles serving a maximum of 7.8 km during the final four years of operation. This service was only up and running from 1952 to 1968. The politcal decision to terminate the service on 1 June 1968 came very quickly, which is best illustrated in the fact that at the same time two of the trolleybuses underwent a comprehensive refurbishment as part of a modernization effort for the system!

Recent developments of the bus network

As an alternative to a tramway, the “reshaping” of the existing motorbus network was under consideration and some improvements of the existing bus-only network were realized over the years. In September 2018, three trunk routes A, B, and C were introduced and the rest of the network was restructured. The “Lignes armatures “ A, B, C account for 40% of the passenger demand, they offer frequencies of 10 minutes (A) and 15 minutes (B and C), and there are four dedicated interchange points at Languedoc, Massilia, Lycée Maillol and TGV station to the remaining 25 bus lines (“Lignes complémentaires”) and additional special routes. All routes use the brand name Sankéo for city bus services. In addition, a bus-on-demand service was introduced to cover certain areas of the town.

Some separated bus lanes were created which allow for a higher average speed on some route sections. However, even the trunk routes A, B, C mainly use public streets and get stuck in traffic at least during rush hours. The current bus operation in Perpignan is pretty far away from a real Bus Rapid Transit (BRT) system, or “Bus a haut niveau de service” (BHNS) as it is called in French. A total number of approximately 10 million passengers on the network was counted in 2019. In comparison to comparable numbers of other French metropolitan areas, there is still quite some room for improvement.

The bus fleet is composed of 12 articulated buses, 51 standard 12-metre buses, 8 midi buses, 12 mini buses and another 37 vehicles for interurban or special services. Among the standard 12-metre vehicles are 17 hybrid buses – pure electric buses are not part of the fleet yet.