Nuremberg: 39 electric MAN-buses to be delivered by the end of the year – first order for Lion’s City18 E articulated buses 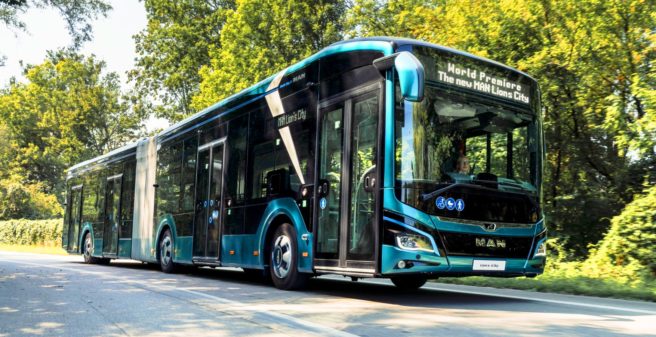 MAN Truck & Bus, one of the commercial vehicle subsidiaries of the VW Group, was pleased to announce a major order from Verkehrs-Aktiengesellschaft (VAG) Nuremberg. It is the largest order for electric buses MAN has ever received, and at the same time the first order for series-production vehicles of MAN’s “Lion’s City 18 E” electric articulated bus.

The order is for a total of 39 vehicles: 28 articulated buses and 11 twelve-metre Lion’s City 12 E buses. The ebuses are to be delivered in the course of 2021. VAG describes the order as part of its strategy “Electromobility as the key to sustainable mobility”.

Josef Hasler, Chairman of the Nuremberg VAG, commented on the order as follows: “In the future, we will also rely on electric mobility for buses. Our new buses will be charged exclusively with green electricity and will be absolutely emission-free and quiet on the road.” And he added: “They offer our customers safety and comfort.”

The 12-metre Lion’s City 12 E will be able to carry up to 88 passengers, while the 18-metre articulated buses will have space for up to 120 passengers. Since there is no space necessary for the installation of a larger diesel engine in the electric buses, the seating area in the back of the buses could be optimised with additional seats. In addition, the fact that the electric bus does not have an engine tower in the back enabled the engineers to design a much brighter interior, which makes the buses more user- andpassenger-friendly.

The electric buses store their traction current in batteries on the roof. The batteries of the 12-metre vehicles have a capacity of 480 kWh and those of the articulated vehicle of 640 kWh. For the batteries, MAN relies on the proven battery cell technology from the company’s modular system. It seems possible to guarantee a range of 200 kilometres for the electric buses, and under favourable circumstances the buses can even offer a range of up to 270 kilometres and that over the entire service life of the batteries.

The vehicles are charged at the depot and via combo plugs. The cars are therefore so-called “over-night-chargers”. VAG emphasises that they deliberately chose this solution because the new electric buses can be integrated very easily into existing operating procedures.

VAG is building an “eBus port” with 39 parking and charging spaces to supply the new electric buses with power. This “charging hall” is scheduled to go into operation in the middle of the year. It will be located in the depot between the parking spaces for the buses and the bus workshop.

VAG and MAN have been working together for many years in the development of new drive technologies for buses. At the beginning of the millennium, VAG tested the “MAN Ultracaps bus” on its line 36. This was a hybrid vehicle with which, in a sense, the recuperation of electricity during braking was “invented”. The recuperated electricity was stored in supercapacitors on the roof (so-called ultracaps), and the next time the bus pulled away from the stop or from a traffic light, it did so with the electricity from these ultracaps. At that time, the author was present during test runs in the normal service on line 36, and it was impressive to see that the bus sometimes managed half the distance between two stops only with the electricity from the ultracaps, and only then the diesel engine had to start.

Finally, some details about the VAG bus fleet: Currently there are 200 buses in service, 75% of which are MAN – the majority (still) being diesel buses. There are also buses with natural gas engines and a number of hybrid buses as well as a few electric buses.