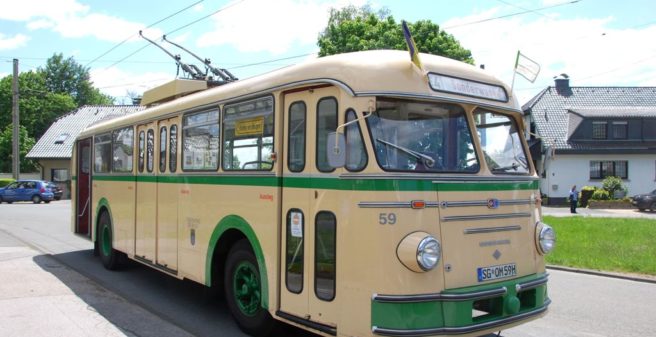 Solingen has one of only three remaining German trolleybus systems today. Once there were more than 70 at a time – in the mid-1950s – only Eberswalde, Esslingen and Solingen remain. Solingen is the largest of the three, with 54 articulated trolleybuses in service today.

The first trolleybus in the Solingen started service on 19 June 1952, gradually replacing the metre-gauge tramway system in stages by 1959. The tramway had suffered severe damage during the war and reconstruction seemed too expensive and (therefore) impractical.

Solingen’s next generation Solingen is the famous “TS” model, initiated by Stadtwerke Solingen’s (SWS) General Manager at the time, Dipl. Ing. Meis: Three-axle trolleybuses were designed by SWS using a modfied Krupp chassis and Ludewig bodywork. The electrical equipment came from the first-generation ÜH IIIs – recycling of old parts at a time when nobody knew the word “recycling”.

These second-generation trolleybuses were called “TS” for “Trolleybus Solingen”. There were three series of them:

The third generation of trolleybuses started operation in 1982, after trial with different ypes of prototypes. This time the supplier was MAN, initially with 21 articulated trolleybuses of the “MAN SG 200 HO” model and soon followed by 46 three-axle, 12 meter long solo trolleybuses of the MAN SL 172 HO model, replacing all previous TS trolleybuses by 1987.

Solingen’s fourth trolleybus generation were 15 articulated trolleybuses of the Dutch manufacturer Berkhof of the type “Premier AT 18” (Premier was the type name for the city line buses of Berkhof, “AT” stood for “articulated trolleybus”, and the 18 indicated the length in meters. numbered 171 to 185 new in 2001 – fourteen of which are still in service today. Berkhof is part of VDL group today.

The latest additions are Solaris Trollino 18.75 “BOB” (=battery trolleybuses). The first four are already in service for some time. They have powerful traction batteries for service off-wire on non-electrified sections of the routes. Stadtwerke Solingen sees the future of its bus service in this technology. Another 32 Solari sBOBs are on order, 16 of the rigid version and 16 more articulated vehicles, which will gradually enter service. The first of the articulated units are already on the Solingen premises, but not yet in passenger service.

After this brief overview of the vehicles of the Solingen trolleybus operation. On May 30, 2021, the 40th anniversary of the extension of line 684 to Hasselstraße was celebrated with trips of historical buses of the association “Obus-Museum Solingen”. On 31 May 1981 this section of the line had opened. Three of the museum’s vehicles were operating on line 684:

These buses provided special trips on line 684 (school Widdert – city center – Hasselstraße and back). Unfortunately, no passengers were allowed on these trips because of the Corona pandemia.

SWS made an effort to use examples of all of the current trolleybus fleet on line 684:

In addition to the historic trolleybuses operating at the anniversary, the trolleybus museum has three more historic trolleybuses: MAN (Gräf&Stift) SG 200 HO articulated trolleybuses no. 5 is currently out of service and needs extensive refurbishment. Also included are former Solingen no. 10, a Krupp/Ludewig TS 1 built in 1969, and TS 3 no. 68 built in 1974. After being withdrawn from service in Solingen, both were sold to Mendoza in Argentina. Trolleybus 68 is currently undergoing a complete restoration, and is expected to be completed and operational again by 2022 while no. 10 will ony receive some cosmetical refurbishment for the time being. In addition, a few diesel buses also form part of the association’s collection.

An overview of all vehicles and the activities of the trolleybus museum, in particular the popular roundtrips under the title “Ritter-Tour”, can be found here:

The association is glad about any kind of support for the refurbishment and maintenance of the vehicles. As soon as possible public rides will be offered again.