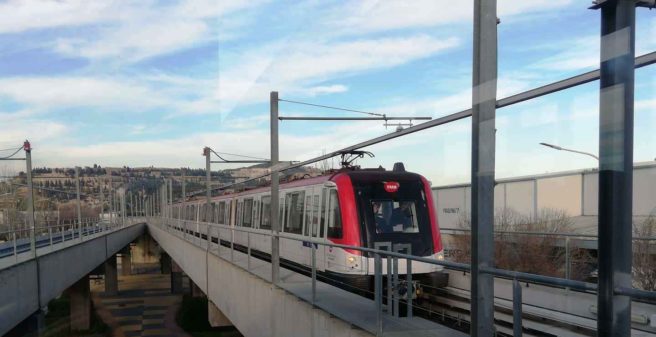 Saturday 1 February 2020 saw the extension of Barcelona’s automated metro line L10 (Sud) by just one stop from Foc to its new southern terminus at Zona Franca. Zona Franca is an industrial area with several logistic facilities as well, and here the line runs on an elevated alignment – for the first time on the entire Metro Barcelona network. Zona Franca is only a preliminary terminus as an extension by three additional stops to ZARL/Riu Vell is scheduled to open in two years time – also on elevated level. The track is already in place on the section for quite some time because it is used to access the depot located next to the future terminus. However, funds were not available to finish construction work of the stations and to open the line – something which also occurred in the past and explains the considerable delays in the completion of this section of the L10. An intermediate stop between Foc and Zona Franca, baptized „Motors“, is to be added at a later stage.

The new extension is part of the 46 km long, cross-town metro lines L9 and L10 which have been under construction for more than 15 years already. Both lines are fully automated and operate driverless (GoA4) – the entire control and automation equipment has been provided by Siemens Mobility. The outer parts of both lines North and South of the city are mostly complete and were opened gradually since 2009 (Northern sections) and 2016 (Southern sections) but the central, cross-downtown section is still delayed due to lack of funds. Work resumed after several years of interruption in 2018 but progress is slow, and no realstic opening date can be scheduled yet.

The new network can be seen here: http://www.urbanrail.net/eu/es/bcn/barcelona.htm