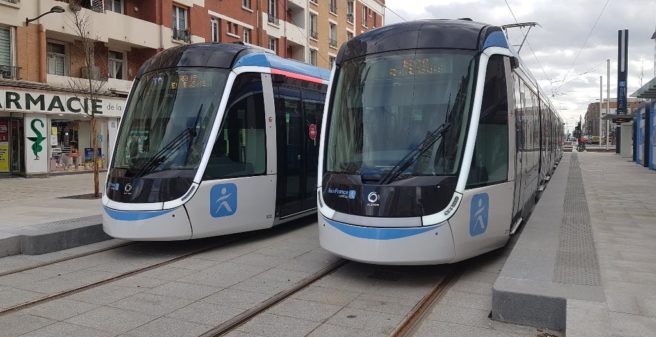 On 10 April, despite the Corona pandemic and lockdown, the 10.3 km new tram line between Paris Porte de Choisy and Orly was inaugurated I © Île-de-France Mobilités

In Paris and its suburb of Orly, a new term has been doing the rounds lately: “Tramway Lumière”. In French, Lumière stands for light, but also for the enlightenment (Siècle des Lumières = century of enlightenment). In this case, however, we are not talking about the enlightenment of the tram, but rather of a new design feature of the new Alstom Citadis trams, which were operated for the first time on 10 April on Paris’ newest tram line. The special feature of the new trams is that the vehicles are vehicles are illuminated from all sides in the dark. This not only looks good, but also increases the visibility of the tram (good for passengers) and thanks to the integrated integrated colour-coded exterior door lighting, it is easier for people with find the doors more easily and recognise whether a door is opening or closing.

The construction and completion of the line has been documented in the following video:

Since Saturday, 10 April, the brand new and eye-catching Alstom Citadis trams have been running on the 10.3 km long line T9, which is not, as the name suggests, the ninth tram line, but rather then tenth or eleventh tram line in Île-de-France, the Paris metropolitan area. The ring tram is divided into lines 3a and 3b, and since July 2017, the tram-train line T11 has been running on the so-called northern rail circle, tram express. Further tram lines are currently under construction:

Furthermore, there are plans for the extension of the existing tram lines T1, T3b and T7.

Now back to the T9: The new T9 line connects Paris and the centre of Orly (Val de Marne). The journey time is 30 minutes and the frequency is 4 – 5 minutes. The line also connects the communes of Ivry-sur-Seine, Vitry, Thiais and Choisy-Le-Roi. The new line is expected to carry 70,000 to 80,000 passengers per day – one of the reasons why seven-section 45-metre trams will be used from day 1.

Despite the Corona crisis and the lockdown, the public transport authority Île-de-France Mobilités decided to open the service anyway so as not to deprive residents and commuters of the new public transport service.

The 10.3 km alignment starts at the gates of Paris at the Porte de Choisy on Boulevard Masséna in the 13th arrondissement. Here passengers can interchange to metro lines 3 and 7, the RER line C and the ring tramway 3a tram. In a few years, line 15 of the Grand Paris Express metro will also stop here. The T9 line runs almost in a straight line on its own track in a southerly direction to Orly. in a southerly direction to Orly. However, Orly airport will not be served. The T9 tramway is rather intended for the connection of the suburbs: it is to relieve congested bus routes, in particular bus route 183 which has been replaced by the new tram, and to encourage people to switch to public transport.

The tram’s right-of-way track was largely built as grass track. The stops were equipped with newly designed furniture: Roof, benches and a kind of “infotower” were designed in a minimalist black and white steel structure with glass elements.

In November 2016, Île-de-France Mobilités chose Alstom to supply it with 22 Citadis X05 (405) trams. The delivery of the trams by Alstom began in November 2019 and was completed in October 2020.

2.65 m wide and 45 metres long, the Citadis X05 tram for line T9 can carry up to 314 passengers. Special attention has been paid to the design of this new tram, created in partnership between Alstom’s Design&Styling teams and the agency Design Saguez & Partners. It has 8 double doors per side as well as enlarged, well-lit interior circulation that facilitates movement and increases the passenger exchange rate by 20%. It features 45% glass surfaces, 100% LED lighting, 8 extra-wide multimedia screens for the dynamic route map, USB sockets and bench seats. The new tram’s design is based on signature lighting throughout the entire vehicle, both inside and out, notably for better visualisation of the opening and closing of the doors. These innovations provide a high level of comfort and an enhanced travel experience.

Eight of Alstom’s 13 sites in France were involved in the manufacture of these trams: La Rochelle for the design and assembly, Ornans for the engines, Le Creusot for the bogies, Tarbes for the modules and equipment, Valenciennes for the interior fittings, Villeurbanne for the on-board computerised systems, Aix-en-Provence for the tachometric control units and Saint-Ouen for the design.

The new depot was built in Orly. In addition to the workshop and the stabling facility, the operations control centre for the for the T9 is also located here. The workshop and maintenance building stands out in terms of architecture, designed by the architects Jacques Ferrier and D’ICI LÀ and the Arcadis engineering company. The aim is to combine building and landscape with each other and thus to give the entire area a smooth identitiy. The pointed roof of the workshop building with angular windows is meant to be reminiscent of industrial buildings from the 19th century. This form also serves energy efficiency, as this design allows a lot of light to stream into the building. The depot is also decorated with gardens and planted paths.

The total cost of €404 million (excluding taxes) for the infrastructure was jointly financed by the Île-de-France Region (52.5%), the Prefecture of Île-de-France (22.5%), the Val de Marne Region (21%), the City of Paris (3%) and the Grand-Orly Sein Bièvre Urban Community (1%). Converted into per kilometre costs, the construction costs amount to no less than 39 million euros per kilometre, but include the renewal of all roads and structures. The trams were 100% financed by the public authority Île-de-France Mobilités for 74.75 million euros. The operation, which for the first time was entrusted to a private operator (Keolis) and not to the Parisian public transport company RATP, costs 9.8 million euros per year and is also financed by Île-de-France Mobilités.

There is no interchange to M3 nor RER C at Porte de Choisy, only T3a and one branch of M7.
Line M15 will have a connection to the T9 but in Mairie de Vitry.