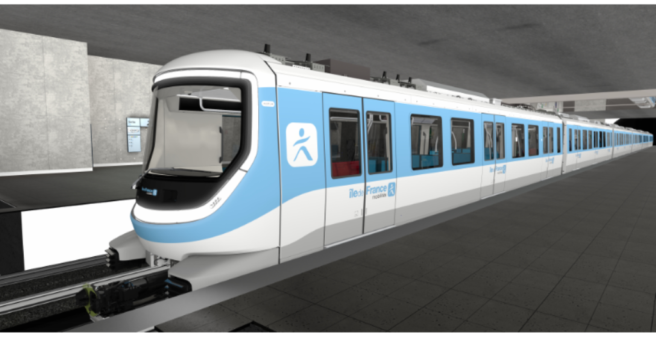 While public transport provides a very good service to the city of Paris with an area of only 105 km2 and a population of just over 2 million, the surrounding and seamlessly connected cities of Greater Paris in the “Île de France”, with a further 10 million inhabitants, are very poorly connected, especially among themselves. The new metro network “Grand Paris Express” is intended to remedy this situation. The project was decided in 2011, construction started in 2015 and all lines should be operational in 2030, carrying two million passengers a day.

The “Grand Paris Express” aims to limit the use of private cars in favour of public transport, promote economic development and provide better connections between working and residential areas. It will provide efficient public transport in neighbourhoods that are currently socially deprived and contribute to sustainable development through its impact on road transport, environmental protection and the improvement of air quality.

Being Europe’s largest urban development project, the new metro is an investment in the future. A total of €35.6 billion has been earmarked for the construction of the Grand Paris Express, including €7 billion in provisions for risks and contingencies. In addition, €3.5 billion is earmarked for the modernisation and adaptation of the existing network: Lines 11 and 14 and RER Line E will be extended and RER Lines A, B, C and D will be modernised.

Along the whole of the new network, the city will be redesigned and densified. The construction of the 68 stations of the Grand Paris Express is already accompanied by urban projects that will accommodate thousands of people from Île-de-France. New residential and commercial areas will be built in the coming years.

In the long term, the new transport network is expected to increase the Île-de-France region’s gross domestic product by more than €100 billion. The investment in the new metro should make this leading economic region in Europe more attractive and competitive. The “Grand Paris Express” should create 115 000 jobs over 25 years. The social and economic benefits of the project are estimated at almost €80 billion.

200 km of automatic lines with 68 new stations will almost double the Parisian underground network of 214 km. Add to this the 587 km of urban and suburban RER lines, and the result is a rail network of around 1000 km with better access to space than Shanghai, Beijing, London or New York. With an average station spacing of around 3 km – compared to less than 500 m for the urban Paris metro – and trains travelling at up to 110 km/h, travel speeds of between 55 and 65 km/h will be achieved, more than twice the speed of the inner-city Paris metro lines.

This will allow direct and fast travel between the suburbs without having to go through the centre of Paris, and better connections to the airports. It will also reduce the load on existing lines (metro, RER, Transilien) in the city centre by 20 to 30%.

The stations will be designed as “transfer stations” to provide good connections between the automatic underground and all other modes of transport. 80% of the new stations will allow passengers to change to other lines. Connections with other public transport, from aeroplane to bicycle, will thus be efficient and comfortable. They will also be designed so that they are not just places of passage, but real living spaces open to the city, with services and shops that contribute to the vitality of the neighbourhoods and the quality of life of their inhabitants.

In order to provide passengers with fluid and permanent access to the Internet, stations and trains will be equipped with mobile and Wi-Fi networks. The combination of these two technologies will make it possible to obtain information, work, play, learn or simply access personalised real-time information about one’s journey. To promote the digital development of the Paris Region’s economy, a high-performance fibre-optic network will be integrated into the infrastructure along the lines.

The existing Line 14 is currently operated with rubber-tyred, 90 m long 6-car trains, but the stations have been designed with 8 carriages in mind, and in the future 72 trains of type MP 14 with a length of 120 m, consisting of eight 15 m long carriages, will run here.

The first vehicles of the MP14 fleet has been put into commercial service on Line 14, between the stations Olympiades and Saint-Lazare on 12 October 2020. Until 2021 some 20 automated metros will be delivered in 2021.

On line 15, trains in conventional wheel-rail technology will be used. The maximum length of these trains will be 108 m, with 6 carriages of 18 m in length, which, with a width of 2.8 m comparable to the dimensions of the RER trains, gives a capacity of around 1000 passengers per train. The capacity of the line at the morning peak will thus be around 30 000 passengers per hour, with a 2-minute interval. The maximum speed of 110 km/h will then allow a trip around Paris in about 80 minutes. Power will be supplied via a 1500 V DC overhead line, with storage or regenerative braking of the kinetic energy released during braking.

Line 18 will also be built using conventional technology with steel wheels on steel rails. The carriages will be 2.45 m wide and the trains will consist of three or four carriages capable of carrying 350 to 500 passengers per train. The power supply will be provided by a third rail with 1500 V DC.

On Friday 2 October 2020, Valérie Pécresse, President of Île-de-France Mobilités and of the Île-de-France Region, Thierry Dallard, Chairman of the Management Board of the Société du Grand Paris, and Henri Poupart-Lafarge, Chairman and CEO of Alstom, revealed the design of the future metros for lines 15, 16 and 17 of Île-de-France at the inauguration of the exhibition Les lignes du design (Design Lines) which opens at the Fabrique du Métro where visitors will be able to see a model of the future metro.

In collaboration with Île-de-France Mobilités, the Société du Grand Paris, its prime contractor Systra and its design agency RCP Design Global, and taking the expectations of public transport users into account, Alstom’s Design&Styling office has created an interior design that offers a fluid, comfortable passenger journey. The interior layout of the metros is designed to be both high in capacity and comfortable.

Further information about the public transport network of Paris including maps and photos can be found here:

The following animated video explains the Grand Paris Express project and its vehicles: