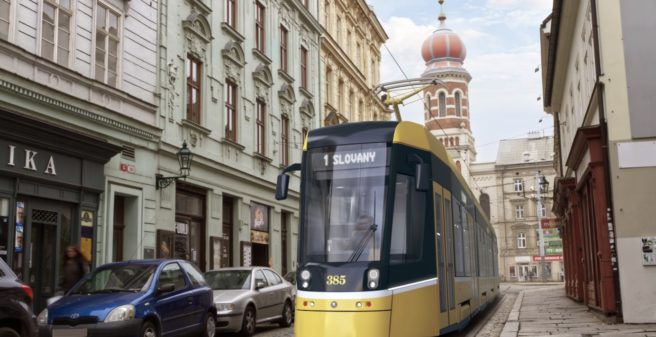 The city of Plzeň is developing autonomous transport together with O2 Czech Republic, INTENS Corporation, Škoda Transportation, Škoda Digital and the west-bohemian University which includes tests with autonomous trams

Transportation mobility of the future are not just self-driving cars, it is an entire ecosystem of interconnected solutions that lead to safer and smoother transport in cities. This is what the city of Plzeň, Plzeň transport companies and Managing Information Technology of the City of Plzeň are planning with their partners – O2 Czech Republic, INTENS Corporation, Škoda Transportation, Škoda Digital and the University of West Bohemia. Their representatives signed a memorandum of mutual cooperation today, with the aim of turning Plzeň into a centre for smart mobility and a living laboratory for testing autonomous vehicles in the city by 2027. This will be the first smart city of its kind in the Czech Republic. The development of an autonomous tram is part of this project.

A living laboratory thanks to 5G

Thanks to the 5G for 5 cities programme, in which Pilsen is actively involved and where O2 is the technological partner of the Ministry of Industry and Trade, the operator started covering the city with 5G networks last year. “The fastest 5G network is now available in almost two thirds of Plzeň. Its key features, such as fast data download and sending, as well as low response and high data transmission security, are necessary to build and operate a functional infrastructure that will allow individual smart elements to communicate with each other,” says Jindřich Fremuth, CEO of O2 Czech Republic.

“Our 5G strategy is not just about building transmitters, it is primarily about real-world applications that can improve people’s lives and help industry,” says Petr Očko, Deputy Minister of Industry and Trade, adding: “The Czech Republic was and is an industrial country, and it is therefore crucial that we do not rest on our laurels; we must invest in its digital transformation in a timely manner. We need to focus on both industry as such, as well as mobility, transport systems and traffic management, and other elements of smart cities and municipalities that can improve the quality of life of the people living in them or commuting there daily.”

Plzeň should therefore become a unique living laboratory that will test various models of smart transport in a real environment. “Residents and visitors to our city will be the first in the Czech Republic to experience a unique ecosystem connecting smart trams, intersections, stops, and even whole smart streets. Vehicles of the integrated rescue system should also be included,” says Vlastimil Gola, Councilor for Smart City from the Plzeň City Hall.

A smart tram on a smart track

The new trams for Plzeň developed by Škoda Transportation are fully air-conditioned, making travel truly comfortable and safe. Five double doors on both sides of the vehicle will allow for quick boarding and alighting. There is naturally also a space for transporting prams, wheelchairs and bicycles. ForCity Smart trams comply with the latest European standards, including requirements for the non-flammability of the materials used, the strength of vehicle bodies, and the impact resistance of the vehicle body. The frame of the front of the vehicle is designed to better protect the driver and passengers in the event of a collision, while being considerate of other road users.

“The connection of our smart tram with the city’s intelligent transport system is making our vision of urban transport management and development come true. We truly appreciate that we were able to participate in a project that will help monitor traffic in the city and optimize it for the needs of all who are part of it with the use of new technologies. Our vehicles will become a natural part of smart cities of the future,” says Kamil Mrva, Vice President for Digitization and IT at Škoda Transportation.

Three-section, bi-directional Škoda Transportation trams are adapted to Plzeň requirements and specifics. The trams offer a technical solution suitable for both sharp turns and challenging uphill tracks in Plzeň.

The modern vehicle will be equipped with a wide range of sensors that monitor the track and potential obstacles. A unit enabling C2X communication, which was successfully tested by O2 as part of the European C-Roads project, will also be installed in the vehicle. “This unit will allow the tram to communicate with other elements on its route via  hybrid ITS G5 communication and the mobile 5G network. It will alert the driver to roadworks or an approaching IRS vehicle, and it can provide priority passage through a busy intersection,” says Martin Volný, Executive Director of INTENS Corporation, which tested C2X systems in the C-Roads project in Plzeň and will also be responsible for the development of smart mobility. It will thus ensure greater safety and more precise timetables, while Plzeň transport companies will be able to plan capacities much better and reduce tram transport intervals. In the following phases, additional sensors in the form of cameras, lidars and radars should be added to the new tram; these can respond to movement faster than the human brain, thus contributing to greater safety for pedestrians and passengers.

“We plan to test the operation of a fully autonomous tram in Plzeň by 2027,”  says Roman Zarzycký, First Deputy Mayor and Chairman of the Board of Plzeňské městské dopravní podniky. And this is not a matter of the future. They adopted a similar approach in Potsdam, Germany, where they have been successfully testing robotic trams since 2018. “Unlike autonomous cars, the autopilot in a tram has a much easier job. It moves along the same route, with which it continuously communicates using sensors, and it does not have to deal with as many variables that would affect the driving. Experience from abroad confirms that reducing human error truly makes transportation safer and smoother,” adds Roman Zarzycký.

The University of West Bohemia will also participate in the development of smart mobility in Plzeň. Near its campus in Borská pole, where fifth generation networks are being used thanks to coverage from O2, a living testing centre will be established for testing the smart tram. “All our technical faculties, i.e. mechanical engineering, electrical engineering and applied sciences faculties, as well as the NTC research centre, will participate in the project. We will participate in the development of control systems, sensors and lightweight mechanical structures,” says Miroslav Holeček, Rector of the UWB.

The digitization of the entire ecosystem, which will be implemented together with the city organization Managing Information Technology, is an integral part of smart mobility. It currently has a very accurate 3D map of the entire city, which it will further expand with a dynamic traffic model, including predictive functions. “The availability of 5G networks will make it possible to collect and process large amounts of data in real time, which will be an integral part of autonomous mobility, enabling the provision of timely information to autonomous vehicles and ensuring their safe operation,” says Luděk Šantora, Director of Managing Information Tecnology of the City of Plzeň.

The whole system will be completely safe and anonymous, and its goal will be to improve the quality and comfort of the life of citizens and visitors to the city of Plzeň. It also aims to support local industry and the emergence of new start-ups that could use this living laboratory for the development and implementation of innovative technologies and procedures.