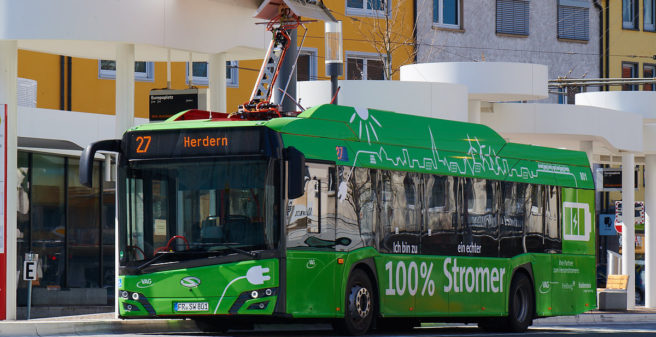 Freiburg/ Breisgau in Southwestern Germany is known for its environmentally friendly transport policy. The city of 230,000 inhabitants already has a well-developed 44 km tram network and a 160 km bus network. The modal split of public transport, foot and bicycle in Freiburg is 79% which is a rather high number in comparison to other cities worldwide.

Since 7 February 2020, Freiburg also has an e-bus line. After 100 days of use, the operator Freiburger Verkehrs AG (VAG) has done positive assessment of the use of the first two electric buses. The small e-bus fleet consists of two 12-meter-long Solaris Urbino Electric, both of which are operated on line 27. The new electric buses are very popular with passengers and residents of route 27. They provide reliable service, the workshop staff as well as the drivers are managing the e-buses, and charging has so far been unproblematic.

“The introduction and the first weeks of operation were completely unproblematic,” reports VAG board member Stephan Bartosch. “So far, there have not even been any ‘teething problems’ that occasionally occur in new vehicles. The charging infrastructure and the interaction with the buses has also worked perfectly so far. And we are still learning a little about the charging frequencies. ”In the meantime, regular electricity is always being charged on Europaplatz when the remaining state of charge of the battery has dropped below 80 percent. This is usually the case after two or three rounds. The full charging capacity of 150 kW there has also gradually been implemented. Our first two electric buses have now covered a total of around 23,000 kilometers, saving 24 tons of CO2 in Freiburg compared to a diesel bus,” added Bartosch.

Everything has been going smoothly not only from a technical point of view: “Our drivers appreciate the quiet driving with the electric motors in every respect and we always hear that also from the passengers,” says VAG board member Oliver Benz and adds: “We always receive particularly positive feedback from residents of the route of line 27: the buses are many times quieter than their diesel-powered counterparts.”

Like the Freiburg tram, the electric buses are operated with certified green electricity. Since VAG cannot manage the switch from diesel bus operation to electric bus operation alone, the project has been funded by the Federal Ministry of Transport and Digital Infrastructure (BMVI). The two e-buses received a grant of 156,500 euros as part of the “Immediate Clean Air Program 2017-2020”. In addition, there are approved grants from the same program for the charging infrastructure (depot and Europaplatz) in the amount of € 36,000.

The two Solaris e-buses have 31 seats and place for 44 standees each with a wheelchair space. They are operated purely electrically. The batteries are located in the rear of the vehicles. At night, the batteries are charged slowly with 80 kW. At a preset time, the purely electric heating of the vehicles is then operated via the charging current, so that the batteries are not burdened and the vehicle can start the first early morning service even in winter with ice-free windows and a pleasant interior temperature. But the buses are also equipped with electric air conditioning for summer operation. A quick charging facility is available at the “Europaplatz” stop for intermediate charging. There the buses are recharged during the turnaround time. This takes place with an output of 150 kW. The rapid charging station is supplied from the existing 750 V DC overhead line network of the light rail network. The electricity is tapped directly from the tram’s catenary. Since this is supplied with two substations, the system has a very high availability. A transformer ensures a galvanic separation between the light rail and the bus system. An inverter converts the alternating current at the output of the transformer into direct current. The devices are located in a technical room.

The energy and environmental service provider badenova supports the introduction of electric buses in Freiburg. “Badenova ensures that future e-buses can also be safely charged at any time. The western depot enjoys particular attention as the central charging station, ”says Dr. Thorsten Radensleben, CEO of badenova. Initially, two charging stations, each 80 kW, were installed in the depot. For the fleet expansion, the connection is designed for a connected load of 6 MVA.

Looking into the future

VAG is currently tendering for a further 15 electric buses, along with the necessary infrastructure for four further e-bus lines. In the spring of 2022, these will replace five 12 meter buses with Euro 5 standard and 10 articulated buses with Euro 5 EEV drives. This investment is supported by a funding program of the Federal Ministry for the Environment, Nature Conservation, Building and Nuclear Safety (BMU) with an amount of 6.3 million euros. The existing infrastructure will be partly used for recharging. In addition, four charging stations with 300 kW each are planned.