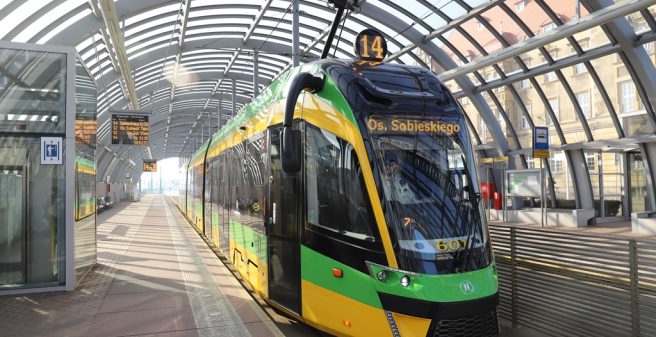 For many years, the GT8s taken over from Frankfurt/Main and Düsseldorf have been in daily use in the metropolis of 600,000 inhabitants in western Poland. The replacement has already begun.

Before the end of this year (2019), the “Helmuts”, as the trams taken over from Germany are called in Polish vernacular, will probably be replaced by new low-floor trams. The Poznań based company Modertrans will deliver 50 three-section low-floor trams of the type Moderus Gamma to the transport company MPK Poznań.

The vehicle series is Modertrans’ first order for Gamma family. Prior to this, the manufacturer built four-axle Moderus Alfa, based on the four-axle 105Na trams from Konstal, and eight-axle articulated railcars with a low-floor centre section as Moderus Beta to various transport companies in Poland. With the Moderus Gamma, which has been planned since 2008, Modertrans enters the league of 100% low-floor trams. A first five-part prototype was presented as a multi articulated vehicle in November 2016 and has been in service since May 2017. However, the vehicle configuration of the series currently being delivered for Poznań differs from the prototype. The series vehicles are designed in three parts with four bogies and have a continuous low-floor car floor with platforms.

The Moderus Gamma for Poznań is 31.40 m long and 2.4 m wide and has 7 doors, five of which are double doors. The vehicles have a four-wheel drive with a total power of 400 kW. The platforms above the motorised bogies are strikingly immense interior space. In order to gain space for the traction motors, the aisle was designed as a “zigzag”. A similar pattern is also found in the interior lighting. A special feature of Poznan are the round line panels above the front of the vehicle, now designed as matrix displays.

The tram network has a route length of 68.8 km. It operates 20 lines with a total line length of 215.66 km. The total bus and tram network carries over 200 million passengers per year. Large parts of the track infrastructure have been modernised in recent years.