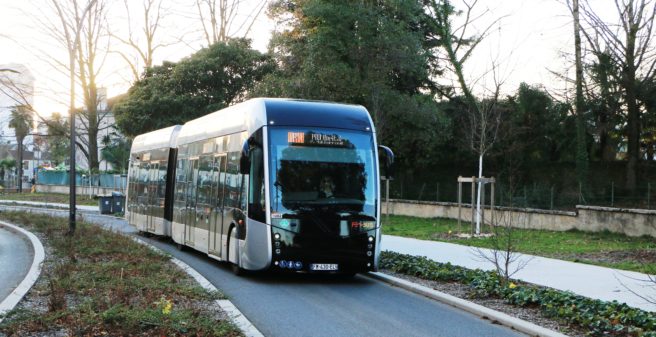 High quality, emission free bus services are being introduced at various locations allover Europe and elsewhere. Hereby, different types of battery-electric buses or modern trolleybuses – sometimes a combination of both (IMC) – have often been the technology of choice but of course they are not the only viable option. The recent advances in the hydrogen fuel-cell technology now also enable a a commercial use on a wider scale.

Pau, a medium-sized city with roughly 77,000 inhabitants located next to the French Pyrenees uses fuel cell hydrogen on its first new BRT (Bus Rapid Transport) route, in France usually referred to as BHNS bus à haut niveau de service (=bus with high service level). Eight Van Hool Exqui.City18 FCs articulated buses have been purchased for the service on the 6 km route between the main station cross-town via the university to the central hospital „Francois Mitterrand“ in the North. One part of the route runs on its own, physically segregated right of way while shorter streches of the route share public streets. Prefrence is always granted on traffic lights to assure fast ride.

The 8 hydrogen-powered articulated tram-buses use hydrogen, which is produced in the operators’ own, solar-powered facilities built on purpose for this operation. The drive of the vehicles converts hydrogen and oxygen into electrical energy through reverse electrolysis. On the one hand, the electricity is used to power the vehicle and, on the other, unused energy is stored in lithium batteries for additional power where and when needed, for example when pulling away from a stop. The only emission from this “zero emission” vehicle is water vapour.

The buses are 18.23m long, 2.55m wide and offer a capacity of 125 passengers, of which 32 can be seated. The ride is very smooth and comfortable and the acceleration is remarkable. The vehicles can be fully refuelled within 10 minutes, and have a travel range of up to approximately 300 km. The batteries are supplied by Ballard Power Systems.

Revenue service with the new ExquiCity began on 16 December 2019. Starting in January, the new buses on the new line called „Fébus“ F1 will be gradually introduced in 2020. Until completion of the conversion, a few diesel buses will be used in parallel. The operator oft he route is French KEOLIS Group. Another emission-free bus service was introduced on a downtown circular route using full-electric GRUAU minibuses.

Fébus clearly fulfills all requirements of a BRT / BHNS system and has already received much attention and recognition during its first few weeks of operation. Most recently and certainly the most glamourous visit was by French President Emmanuel Macron on 14 January 2019.