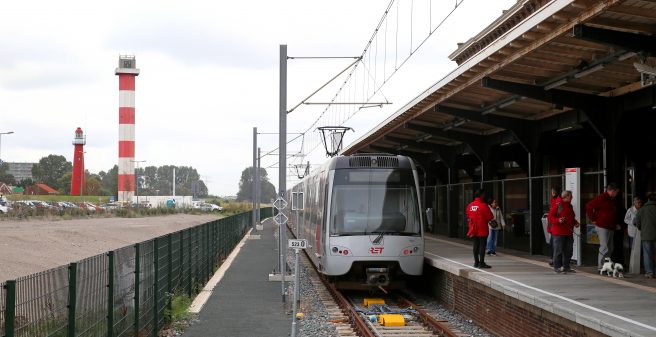 The Netherlands are amongst the most densely populated countries in Europe. Urbanisation and suburbanisation are continuously progressing. The Randstad region includes the country’s largest cities Amsterdam, Rotterdam and The Hague – together with a number of other important towns like Haarlem, Leiden and Utrecht, more than 6.6 millions people are living in the conurbation.

To improve the connection between the most important urban centers and its surroundings, „cross-over“ solutions between different rail systems already were already built decades ago. The most prominent example of the last 15 years certainly is the Randstadrail system which which connects Rotterdam’s metro with The Hague’s tramway system using mixture of tram-train and metro vehicles on a former railway alignment.

Rotterdam did the next step on 29 September 2019 when the new Hoek van Holland line or ‘Hoekselijn‘ has been inaugurated. This is not a „simple“ extension of an existing metro service, but the conversion of a previous heavy railway line into a metro and the integration of it into the city’s metro network.

The extension now open to the public provides 22 km of new metro service between Schiedam and Hoek van Holland Haven and Schiedam, where the trains continue over the existing metro route A/B via downtown Rotterdam to Nesselande/Binnenhof northeast of the city center. Metro line B from Nesselande runs from Nesselande to Hoek van Holland Haven or Maassluis West (in the future to Maassluis Steendijkpolder). Metro line A connects Binnenhof with Vlaardingen West. For some freight trains a connection will be maintained to the national rail network at Schiedam. Special interlace track layout is necessary to allow the freight trains to pass the high platforms due to the different loading gauge. In 2021 or may be 2022, the line will be extended to Hoek van Holland Strand by a further 2 km.

Hoek van Holland is well-known as the country’s main long-distance ferry terminal. Railway service started here in 1893. The line has been electrified in 1935. NS „Spinter“ EMUs of series 4100, 4200 and 7100 operated the suburban trains, during summer until Hoek van Holland Styrand, directly on the shoreline, and the rest of the year to Hoek van Holland Haven. Long distance railway service were also operated once. Railway operation lasted until 31 March 2017 when the comprehensive conversion works started. The increase of housing areas and the local population in the entire area and the wish for a direct connection to the center of Rotterdam without the need to interchange at Rotterdam Centraal are the main reasons for the conversion of the line into a metro.

Reconstruction works included changes in the station layout, the station access areas, the rail and and overhead equipment as well as the power supply. The line is now operated with 750V DC throughout, compared to 1.500 V DC at the national railway network. Bombardier trains series 5701-5722 referred to as „HSG3 Hoekselijn Sneltram Geleed 3 Wagen“ have been built on purpose for the new line, however, the identical model „SG3“ numbered 5601-5642 will also be used. Both feature pantographs as well as current collector for third rail operation – the outer sections of metro line A and B beyond Capelsbrug use catenary for power supply as there are several level crossings. The section Schiedam – Hoek van Holland is also equipped with overhead wire. In Rotterdam the sections with overhead wire are called „Sneltram“. Between Schiedam and Capelsbrug, lines A and B are operated with the traditional third-rail for current collection.