Return of another TS trolleybus to Solingen 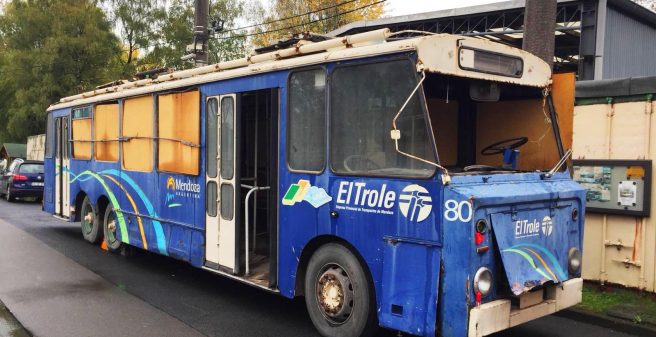 Some five years after the return of one of Solingen‘s iconic „TS“ trolleybuses from Mendoza in Argentina to Europe raised much attention among enthusiasts and the local population, there will be another brilliant coup, with a similar bus coming home to Solingen soon. Former Trolleybus no. 10 (in Mendoza no. 80) started its long journey from Mendoza on 19 September and left South America on a RoRo vessel on 30 September. The trolleybus finally arrived in Solingen on 5 November 2019.o be in in late October.

As with trolleybus no. 68 (Mendoza no. 51), which returned from Argentina in 2014, no. 10 forms part of a series of 80 trolleybuses, which were designed by the operator Stadtwerke Solingen itself in the late 1960s, when no contemporary and useful trolleybus model was available in the market at that point of time. These buses were constructed by Gebr. Ludewig in nearby Essen/Ruhr, using Krupp axles to build the chassis, and equipped with second-hand motors and electric equipment from Garbe Lahmeyer and Kiepe. When replacement came in the 1980s, 78 vehicles were sold to Mendoza in Argentina in 1988 at a bargain price of DM 500.000,- (approx. EUR 250.000) altogether. 57 vehicles entered into service again providing a reliable service there until 2009/10.

The first 14 trolleybuses were part of a sub-series called „TS1“ (TS= trolleybus Solingen), which differed from a later series in some details. They all offered entry on the first door and were approximately 40% low-floor over the length of the vehicle. They definitely belonged to the first low-floor city buses worldwide!

Back in its original hometown Solingen, the group of enthusiasts of Obus-Museum Solingen e.V. will cosmetically repair the trolleybus and occasionally display it to the public. The bus is in a very neglected shape, and full restoration is not an option, at least not for the foseeable future. The restoration of the other TS – no. 68 – already needs a high amount of time and money before being operational and out on the streets of Solingen again.