Return of the trolleybus: 30 Hess lighTram for La Chaux-de-Fonds and Neuchâtel! 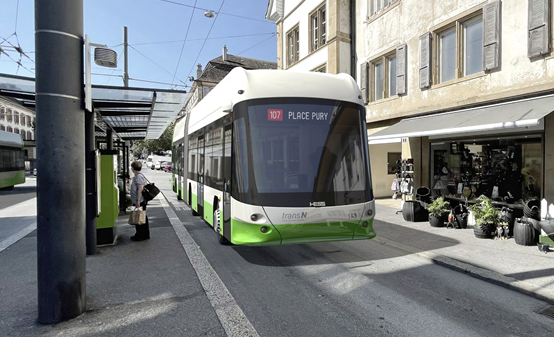 In May 2014, the trolleybus service in the city of La Chaux-de-Fonds (37,000 inhabitants) in the Swiss Jura ceased – officially due to construction works, but a resumption seemed more than doubtful, even though the overhead remained largely in place. But things developed postivly:  Carrosserie Hess will deliver a total of 30 battery trolleybuses of the well-known type lighTram19 DC to TransN (Transports Publics Neuchâtelois SA) in two tranches in 2023 and 2026. TransN operates the public transport services both in La Chaux-de-Fonds and in neighbouring Neuchâtel. In Neuchâtel, the new vehicles will replace the 30-year-old NAW/Hess/ABB articulated trolleybuses – 12 of them are currently still in service. They are the last non-low-floor trolleybuses in the country.

Thanks to their powerful traction batteries on board, the new Hess LighTram19 will enable the extension of the existing three trolleybus lines 101, 102 and 107 without the need to invest in new overhead infrastructure. This is forseen, among others, on the the Avenue des Champs-Montants to the Marin shopping centre.

In La Chaux-de-Fonds, the new trolleys will operate on lines 301, 302 and 304 and replace diesel and hybrid buses. On most part of these lines the old overhead is still in place. However, it will be renewed. In addition, the power supply system and part of the depot installations will be adapted to the new vehicles. The long-lasting political discussion about the resumption of operations has thus come to a positive end: After a break of about 10 years, the trolleybus will return to La Chaux-de-Fonds!

Hess low-floor trolleybuses are or were already in use in both cities before. In La Chaux-de-Fonds, five NAW/Hess/Siemens articulated trolleybuses of the “Swisstrolley 2” model were supplied new in 1996 numbered 121-125. Two of them were passed on to Neuchâtel after the closure in 2014, but saw little use there. Neuchâtel itself purchased twenty “Swisstrolley 3” articulated trolleybuses from Hess with electrical equipment from Kiepe Electric in 2009-2011, which are still in service today.