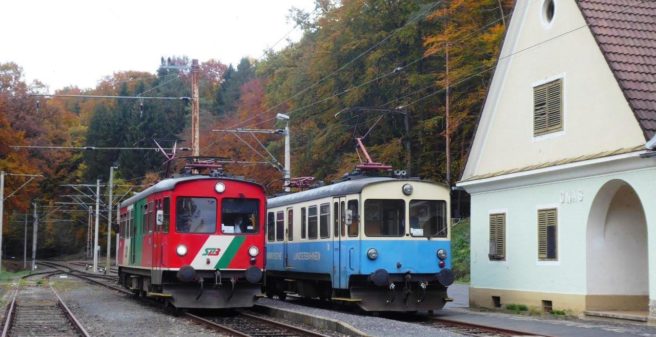 Both electric trains at once - a rare occasion, regualar serivce is provided by just one train. Here at Gnas | © Gunter Mackinger

Passengers and local politicians are currently concerned about the future of the regional railway lineFeldbach – Bad Gleichenberg in Eastern Styria. Within the framework of a regional transport concept, the reduction of the offer on the electric local railway to purely tourism-related matters was planned. However, in recent weeks it has become increasingly clear that there are no customers for a tourist offer and therefore 12 December 2020 could be the last day of operation. Especially during the golden days of autumn, many locals and guests in the East Styrian hilly country said goodbye to the lovable electric railway.

Planning and construction of the local railway Feldbach – Bad Gleichenberg was already quite complicated and took 45 (!) years, from 1886 to 1931. With its opening in 1931, Austria got its only electric railway in the standard voltage of 1500 Volt DC. In 1945, the railway was so badly damaged during hostilities that it took until 1948 before a normal electrical operation was possible again. Legendary are the direct trains and course carriages from Vienna South to Bad Gleichenberg, which ran under the brand name “Oststeirer” until the 1970s.

The service currently consists of 4 trains per day, which are used by around 60,000 passengers per year. It remains to be seen how the Transport Minister of the Green Party will decide on the possible discontinuation of this unique electric railway although the main responsibility for this decision lies with the regional policy-makers. The local railway Feldbach – Bad Gleichenberg is repeatedly criticised for its unfavourable routing – but a realistic estimate of its potential, assuming integration into the Graz S-Bahn system (such as the LB Peggau – Übelbach) with through trains to Bad Gleichenberg, has not yet been made.

More information and maps you may find here: