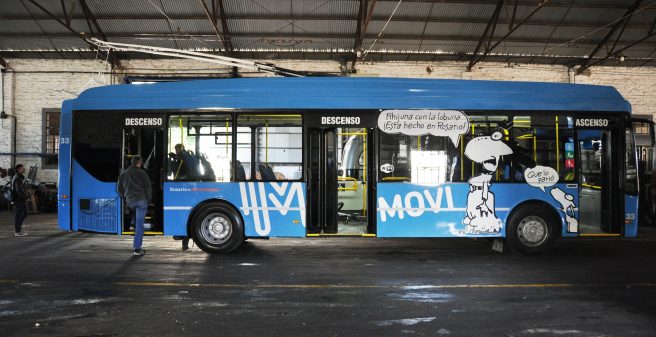 Trolleybuses operate in 3 Argentine cities today, in Mendoza, Córdoba and Rosario. All three took different initiatives to modernize their aging fleets. Mendoza shut down the entire 6-routes network for some 1,5 years and returned only a few modern low-floor, Argentine-built trolleybuses to service (see: https://hosting129892.a2e10.netcup.net/en/start-of-new-investments-in-mendoza/). The other two operator bought Russian trolleybuses in recent years.

Self-relience and independency from imports of foreign goods ranks high on the political agenda, and therefore it does not come as a total surprise that local trolleybus product is also considered as a favorable option for fleet renewal. Therefore the bus and coach builder Biobus in Santa Fé province took the initiatve to convert the Tatsa motor bus model Puma D12 into a trolleybus. Electric motor equipment has been supplied by Argentine company Motores Czerweny S.A., which has a nominal power of 94 kW, and only minor parts have been supplied by WEG. There is only a small auxiliar diesel motor, but no state-of-the-art off-wire capability in the vehicle. The prototyp was in use as diesel bus in Buenos Aires since 2011.

The new Biobus trolleybus was officially presented to the public with much ceremony by Santa Fé’s province governor on 30 May 2019 and will now start test running in Rosario. Here a small fleet of Marcopolo trolleybuses built in Brazil in 1988 and in revenue service for more than 25 years is in the need of replacement, in spite of some refurbishments undertaken a few years ago. The vehicles were originally built for the ill-fated system in Belo Horizonte which was never completed. After 5 years they arrived almost new in Rosario in 1993 and provided reliable service on trunk route K since January 1994.

Another electric bus route opened in 2016 as line Q. It uses part of the overhead of line K and continues then several kilometers off-wire using the traction batteries of the vehicles as power supply. 12 hybrid trolleybuses were delivered by TROLZA from Russia. They charge their batteries while running under the overhead wires. Stability problems of the body work have been showing up in recent years.

Arguably the most remarkable bus in SEMTUR’s depot is the 1961 built Fiat/Alfa-Romeo/CGE trolleybus 39 which had been fully restored to operating condition is occasionally in use for private parties.