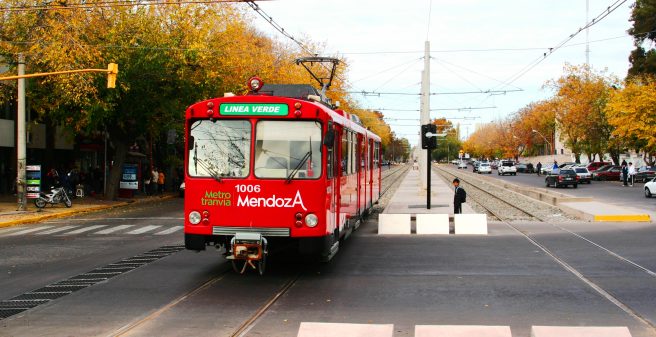 In Mendoza/Argentina a new light rail line started operation with a large publicity campaign in 2012. The completely new system is one of only a few of its kind in Latin America. A northbound extension by 5.1 km and 9 stops to Las Heras was opened to the public on 7 May 2019. As with the first route, the trackbed of a former main railway was largely used and converted into a modern light rail line.

Metrotranvía Mendoza – as the system has been branded locally – is well known by the use of second-hand, but very well maintained Siemens “Frankfurt U2”-type light rail vehicles from San Diego in the USA. This low-cost investment in a total of 25 such vehicles turned out to be very favorable as the train sets were still in excellent condition despite some 30-years service life in the US. Not even a new paintjob was necessary. The first 12.5 km standard-gauge route was built transforming the urban stretch of a former long-distance railway line, including electrification and double-track layout. In 2012, this first line with 15 stops between the old central station (Estación Central) and Gutiérrez started revenue service. Already then the continuation of the northbound route on existing rail tracks up to Las Heras was considered. Long-lasting political discussion and other kind of problems and troubles delayed the expansion process, and for quite some time the future did not look too good for the Metrotranvía.

Starting about a year ago saw a change for the better: Intense construction work started. 6 May 2019 was the date of the official inauguration, and the day after revenue serive over the complete route began. The trains now run at a frequence of every 10/11 minutes. A further expansion is in the planning phase.

A somewhat similar situation can be found at the once extensive trolleybus network which used to consist in six lines until 2015/16, until political disagreements and, at the end of the day, also a lack of interest significantly contributed to its’ decline. There were no trolleybuses running on the streets of Mendoza for 1.5 years, but there is also a ray of hope here: Eight of the remaining 13 low-floor buses from local manufacturer Marterfer resumed service on circular line 1 “Parque” on 2 January 2019. They were painstakingly restored after the almost two-years shutdown. This was needed although these vehicles are only 5-6 years old anyway. The remaining trolleybus lines will mainly use hybrid buses of private companies. Maintenance of the overhead infrastructure has already been discontinued.

The refurbished trolleybuses have been renumbered – currently available for operation are the following: