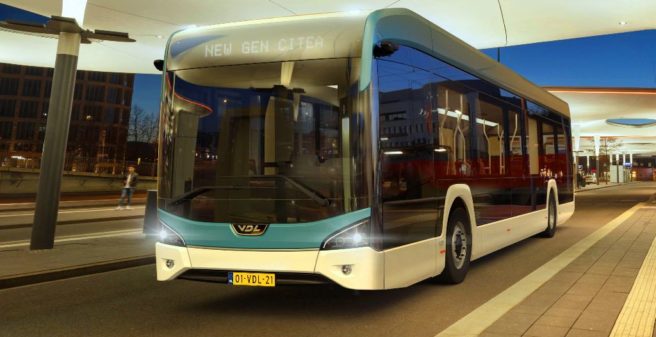 Eleven years ago, in 2011, Kraft-Verkehrs-Gesellschaft Braunschweig (KVG) started operating its first buses from the Dutch manufacturer VDL. These were buses of the type “Citea LLE-120/255”, i.e. 12-metre-long low-entry buses with an engine output of 255 hp. The “Citea LLE” was created as a further development of the “Ambassador” by the Dutch bus manufacturer Berkhof from Heerenveen, which in turn was merged into VDL. The strength of the Ambassador (and thus also of the Citea LLE) lies primarily in its low tare weight, which is based on the use of plastic instead of steel for essential parts of the body. Low tare weight = low weight that the bus has to lug around = low fuel consumption. The author knows a bus operator from the Bonn region who bought a first Berkhof Ambassador after 2000. He found its consumption values so pleasing that his fleet now consists of ten VDL Citea-LLEs, which he uses on behalf of the Rhein-Sieg Verkehrs-Gesellschaft (Troisdorf).

In 1904, the well-known and legendary commercial vehicle manufacturer Büssing presented its first bus.  It became known as the “Braunschweig – Wendeburg”. This was because Büssing’s policy at the time was that a new vehicle should first be tested “in its own company”. That’s what the Büssing Kraftwagen-Betriebsgesellschaft was for. And they had the first Büssing bus of 1904 shuttle between Braunschweig and the village of Wendeburg. Whether this was done on behalf of the post office (instead of a stagecoach) or whether the bus only carried postal consignments can no longer be clarified beyond doubt. Nevertheless, the 1904 Büssing proved itself splendidly in the “flat country” northwest of Braunschweig.

And so Büssing dared to take on far more challenging tasks. Buses were built for the sometimes really steep stretches in the Harz mountains – as an example, the federal road 4 between Bad Harzburg and Torfhaus. And these coaches also proved themselves in the Harz on the lines of the Büssing-Kraftwagen- Betriebsgesellschaft. When the First World War came, and with it Büssing’s regular service in the Harz came to an end.

On 22 November 1919 a successor company was founded with the name “Kraftverkehrsgesellschaft mbH Braunschweig (KVG)”. This new company was no longer owned by Büssing, but by the then state of Braunschweig (merged into the state of Lower Saxony after 1945) and several municipalities in the region. For example, the state capital of Braunschweig, whose transport company initially had no buses of its own, but had KVG Braunschweig coaches running on its bus routes, which were established from 1925 until 1928.

KVG initially remained faithful to the buses of its “founder” Büssing. It was not until the Second World War that there was a large procurement of Skoda buses – from the then “Reich Protectorate of Bohemia and Moravia”, now fortunately known as the “Czech Republic”. The Skodas must have been good, because in the 1950s quite a few of them were still in service with the KVG.

The owners were later joined by the Deutsche Bundesbahn. This was reflected, for example, in the fact that there were hardly any rail bus lines in the Braunschweig area.

At the moment, KVG Braunschweig is in the process of delivering 16 battery-electric VDL buses of the now discontinued Citea generation, i.e. the “Citea SLF-120/electric”. Four of them have already gone to the Helmstedt depot and five to the Wolfenbüttel depot; in both cities the coaches are used in the city services operated by KVG.

These cars have not even been delivered yet, as KVG is already ordering 16 more electric Citea from VDL. They will differ significantly from the currently delivered cars, as they will already belong to the new generation of Citea. VDL will deliver them in 2023 and their type designation will be “Citea LF-122”.

The new Citea will only be available with electric drive – in contrast to the cars of the current generation, which is being phased out. This explains why the suffix “/electric” in the type designation can be omitted. And the leading “S” (or the leading “L” in the former Ambassador series) can also be dropped because the bodies of the new Citea are no longer made either largely of steel or to a large extent of plastic, but now have a clear plastic content in all versions. The side panels of all versions are made in one piece from composite material. So there is no need to distinguish between different designs.

The high proportion of plastic in the body makes the vehicle lighter. As a result, the consumption of the bus is reduced and the batteries, if necessary, may weigh more.

A very important detail in the new generation of the Citea is that its batteries have not been placed on the roof, or where a diesel version would have its engine, but that the batteries are installed under the floor. In doing so, VDL has managed to keep the batteries so flat that the bus is still a fully-fledged low-floor bus.

The new Citea will be built in a completely new factory in Roeselare, Belgium, which was built especially for it. Roeselare is not an unknown production site for VDL: it was home to the Belgian bus builder Jonckheere, which together with Berkhof, Bova, Denolf & Depla, Hainje and Kusters, has been merged into VDL.

KVG’s new electric Citea will have batteries with a storage capacity of 429 kWh. This gives them a significantly extended operating range compared to previous battery buses: even in difficult weather conditions – winter with the heating on full blast or summer with the air conditioning on full blast – they can cover up to 300 kilometres. The air conditioning works with a heat pump to reduce energy consumption. Recharging on the line is not necessary for the range of 300 kilometres and is therefore not planned – recharging is only done overnight at the depot via CCS combo plugs. (Gone are the days when it was thought that battery buses on the line were not possible without on-the-road recharging).

Compared to the current generation of the Citea, the driver’s workplace has been significantly improved. He can look forward to a considerably better seating position, he has to use noticeably less force to steer.

And the operations staff, who are responsible for scheduling operations, will not be unhappy to see that the new Citea can carry more passengers than the generation now being phased out.