Siemens sets course for establishing next generation of management 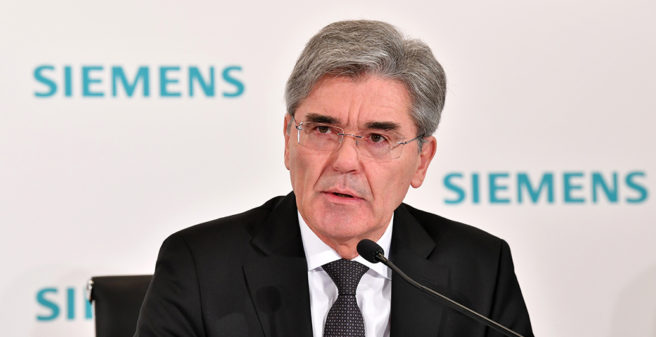 Siemens is setting the course for establishing the next generation of management. To this end, the Supervisory Board of Siemens AG has made pivotal personnel decisions at an extraordinary meeting today. Siemens President and CEO Joe Kaeser (62) has informed the Supervisory Board of Siemens AG that he will not be pursuing an extension of his contract. He will be proposed as Chairman of the Supervisory Board of Siemens Energy. The Supervisory Board has appointed Roland Busch (55), who is currently Deputy CEO, to be President and CEO of Siemens AG. At the latest, this appointment is to be effective at the end of the next ordinary Annual Shareholders’ meeting, which is to take place on February 3, 2021. He is receiving a new contract for five years, effective April 1, 2020. In this connection, he will already be responsible for the planning and implementation of the budget for fiscal 2021 and will be assuming all relevant responsibilities within the Managing Board. In addition to his current duties, Roland Busch will – effective April 1, 2020 – also already be responsible for the overarching integration and management of the businesses of the future Siemens AG (Smart Infrastructure, Digital Industries and Mobility) within the Siemens Managing Board.

Effective immediately, Joe Kaeser will, in addition to his current duties, assume responsibility within the Managing Board for Siemens Energy, including Siemens Gamesa Renewable Energy.

At its extraordinary meeting today, the Supervisory Board of Siemens AG also appointed Christian Bruch (49), who is Executive Vice President of Linde plc and CEO of Linde Engineering, to be the new CEO of the Gas and Power Operating Company and designated CEO of Siemens Energy, effective May 1, 2020. On an acting basis until May 1, 2020, operational management of Siemens Gas and Power will be in the hands of Tim Holt, Chief Operations Officer and Chief Human Resources Officer of Gas and Power. Maria Ferraro (46), who is currently CFO of the Digital Industries (DI) Operating Company, has been appointed the new CFO of Siemens Energy, effective May 1, 2020. Michael Sen and Klaus Patzak, Siemens Energy’s designated CEO and CFO, are leaving by mutual agreement. Michael Sen will remain available as an advisor to the President and CEO of Siemens AG until the spring of 2021.

“In recent years, Siemens has been successful in terms of business while simultaneously driving an era of renewal and of consistently gearing the company toward the future. On behalf of the entire Supervisory Board, I’d like to thank Joe Kaeser very warmly for acting with foresight and for demonstrating the decisiveness and courage to set up Siemens for the future from a position of strength. With all his experience and his excellent network of contacts to customers that have global operations and to governments around the world, Joe Kaeser will be an important advisor to the Executive Board of Siemens Energy.

Roland Busch is the right person to take the helm of the future Siemens AG. He combines entrepreneurial farsightedness and closeness to customers with a deep understanding of all the technologies that have made Siemens successful in the past and will be crucial for its future. He will be bringing new momentum to the businesses and teams at Siemens, and – in times shaped by the digital transformation – he will continue to rigorously drive their ongoing development. The Supervisory Board wishes Roland Busch every success in this exciting task.

Siemens is currently preparing the spinoff of Siemens Energy. The process is on schedule and Siemens is still pursuing a public listing of the company in September 2020.