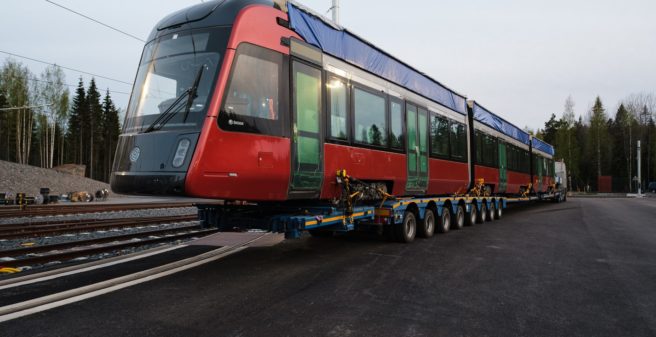 Škoda Transtech, member of the Škoda Transportation Group, delivered the first, bidirectional 100% low-floor ForCity Smart Artic tram to Tampere on Monday, 25 May 2020. Nineteen low-floor trams worth more than 100 million EUR will gradually be delivered to the third largest city in Finland. The inauguration of the Tampere’s tram system is scheduled for 9 August 2021.

Tampere has ordered nineteen trams for the first stage of the newly emerging tram network, including a ten-year full maintenance service contract. The contract also includes three additional options for up to 46 more vehicles. Another 29 trams will be delivered to Finland in the coming years for the new tram line connecting Helsinki and Espoo.

Compared to Helsinki’s Smart Artic trams which measure 27.6 m in length and 2.4 m in width with meter-gauge bogies, the ForCity Smart Artic Tampere tram could be called the “big brother”: 37.3 m long and 2.65 m wide with a gauge of 1,435 mm, it is fully low-floor and can accommodate up to 360 passengers. The vehicle also offers barrier-free access for wheelchair users and prams. The all-wheel drive and the robust design of the carbody with axles enable trouble-free operation in challenging climatic conditions.

Tampere already planned a tram in 1907. However, the project was interrupted by the World War I. Discussions in the 1920’s led to the implementation of a conventional bus system which was converted into a trolleybus system in 1948. Trolleybuses operated until 1976. The implementation of a modern tram system was back on the table in 1991. However it took until the 2000’s for studies to begin. The preliminary general planning of Tampere’s modern tramway began in 2010. The city council voted to approve construction of a tramway in 2016. Construction of the first stage of the tramway began in the spring of 2017.

Tampere’s tramway is being built in two stages. The first section from Pyynikintori to Hervanta and the Tampere University Hospital area is being implemented in 2017–2021. It includes the depot which is located in Hervanta. For the construction, the so-called Tramway Alliance has been formed which includes the client, i.e. the City of Tampere, and the service providers, i.e. YIT Construction Services, VR Track Oy and Pöyry Finland Oy which are in charge of designing and constructing the tramway infrastructure and the depot area. The city will acquire the tram cars as a parallel procurement. The first two lines will have a total length of 15 km. The system will work with 750 V DC network via 10 substations.

The city will be in charge of operating the tramway and founded the operating company “Tampere Tramway Ltd.”. The bus lines will be coordinated with the tram lines.

Planning of part 2 is currently in progress, and the target is to build a track from Pyynikintori to Lentävänniemi in 2021–2024. It includes the section from Pyynikintori to Lentävänniemi. A “branch line” in the Ylöjärvi direction – the track section between the Hiedanranta and Lielahti – will be planned separately. Tampere City Council will make a decision on implementation of this project by autumn 2020 at the latest. Once completed, the tramway network would have a combined length of 23 kilometres.

A German test tram from Hannover

As the first section of the Tampere tramway is already ready for testing, Skoda-Transtech decided to procure a second hand tram from Hannover, Germany, in order to start the testing of the infrastructure. Type 6000 tram no. 6148, built in 1981, was shipped to Finland in February and has been decorated with a specific yellow-red livery. Testing of Tampere’s tramway track and tramline system with the test car started in March.

Test drives of the tram can be seen in the following video:

A good overview of the Tampere tram project can be found here: