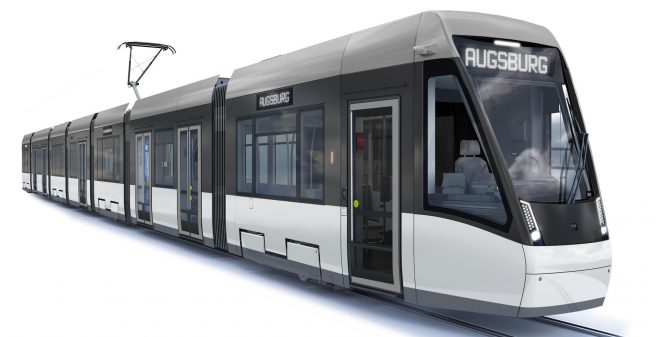 Design simulation of the new Tramlink tram for Augsburg I © Stadler

Stadtwerke Augsburg awarded Stadler the contract to supply eleven Tramlink trams. The new seven-section  low-floor trams will replace the last three MAN-built high-floor trams and the first generation of GT6M ADtranz-built low-floor trams. Another part of the contract is the maintenance of the vehicles over a period of 16 years. This is the first maintenance contract in the light rail segment for Stadler in Germany. The order volume amounts to 57 million Euros. The contract also contains an option for the delivery of another 16 trams.

The new Tramlink trams will enter service in Augsburg from 2022 onwards. The fully low-floor accessible and barrier-free vehicles are 42 meters long and can accommodate 231 passengers, of which 86 on seats. The new trams will also be used for the planned expansion of Line 3. Augsburg’s tram network has a length of 45 km with 5 operational lines.

The rolling stock consists of: